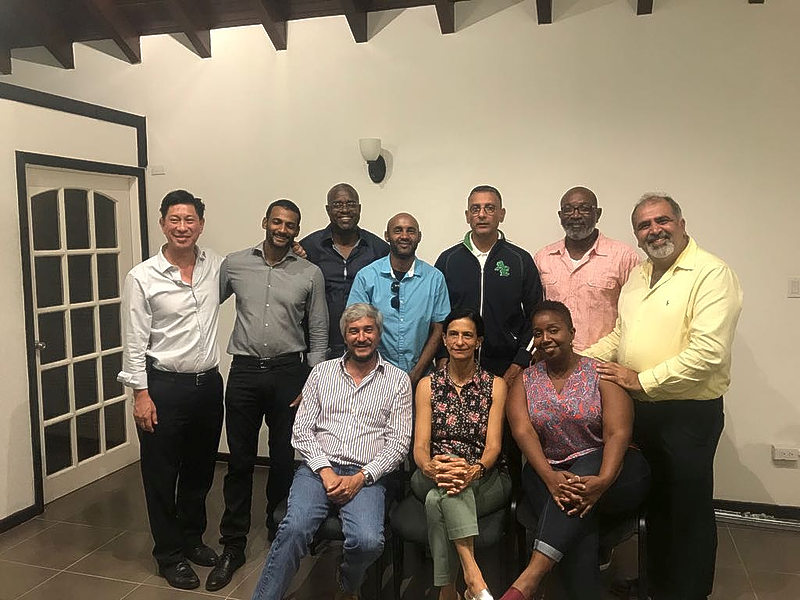 PHILIPSBURG–The current coalition Government has split with the two Democratic Party (DP) Members of Parliament (MPs) and United St. Maarten (US party) MP Chanel Brownbill signing a declaration to work together with the United People’s (UP) party, forming a new majority of eight in Parliament.

The declaration was inked on Monday evening and comes after bombshell statements made by DP Leader Sarah Wescot-Williams, who took a firm stand against her coalition partners on Friday when she indicated that if she is not allowed to have her own position on the matter of aid to St. Maarten, then she has no place in the coalition her party had supported.
The new majority consists of Brownbill (US party), Wescot-Williams and Perry Geerlings (DP), and Theo Heyliger, Franklin Meyers, Tamara Leonard, Claret Connor, and Sidharth “Cookie” Bijlani (UP). This means that the new majority has a one seat majority. This leaves National Alliance (NA) with five seats in Parliament and US party with two of its three seats in the minority.
Wescot-Williams said in a press release last night that the eight MPs signed the declaration “assuring their commitment to break the deadlock that exists, do so convinced that any delay tactic at this eleventh hour will not result in any reconsideration by the Dutch Government for St. Maarten.”
The signing of the declaration comes on the heels of an announcement by Prime Minister William Marlin at a press conference on Monday that St. Maarten has agreed to the conditions set by the Dutch Government to receive aid, including the Integrity Chamber and border control.
“We have to say what we mean and mean what we say. It is an unfortunate position this country finds itself in and without pointing fingers, we believe that the relationship between the Dutch Government and the Government of St. Maarten which has been off and on, now hangs in the balance,” Wescot-Williams said in her press release issued late Monday evening.
“This at a time when our country’s recovery hangs in the balance; the outlook is bleak and there are no miracles. Our economic buoyancy and resilience that characterise us, while shaken, is still present. Clear is, however, that the kind of recovery that we envision, the speed with which we envision such, after the kind of disaster St. Maarten went through is only possible through a multiple faceted approach.”
She said crucial to that approach is having the funding available to tackle the myriad issues facing St. Maarten.
“Crucial to that approach is a clear and shared economic vision. Crucial to that approach is communication and participation. With the above and not wanting any misunderstanding to be used against the people of St. Maarten, we have issued a strong statement by means of declaring that we – with the prospect of aid to the tune of hundreds of millions of euros, will agree with amendments to the national Integrity Chamber ordinance and the conditions regarding the border control, with the firm conviction that this is in the interest of the people of St. Maarten foremost.”
In the declaration, a copy of which Wescot-Williams e-mailed to the media, the signatories committed to amend the draft national ordinance on Integrity Chamber and include the matters raised in the letter from the former Dutch Minister of Kingdom Affairs dated October 13, and to instruct the Justice Minister of St. Maarten to negotiate a mutual agreement with the Dutch counterpart to realise the cooperation as recommended in the same letter.
The signatories also committed to the principle of integrity, transparency and good governance, to a clear and actionable economic plan developed in cooperation with the community, to manage the labour market and skill development programmes to ensure maximum employment for residents, to work together to bring about stability, tranquillity, and hope through fast-tracked and sustainable economic development and to spare the people of St. Maarten any further political uncertainty and any talk of elections.