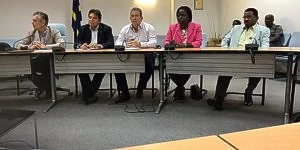 WILLEMSTAD–During an urgent press conference on Wednesday afternoon Curaçao’s new MFK/KdNT/PS/MP/Braam/Dannawi coalition announced that they will no longer stand in the way of the upcoming elections on April 28.

The group with 12 of the 21 Parliament seats headed by MFK-leader Gerrit Schotte said that they were not against elections, but had considered the dissolution of the legislature and calling of snap elections by the then outgoing Koeiman cabinet unnecessary, because there was a different majority willing to form another government.

All twelve parliamentarians now agree that the people of the island should get the opportunity to “voice their disgust with the capitalist forces that have our island in their grip,” said Schotte.