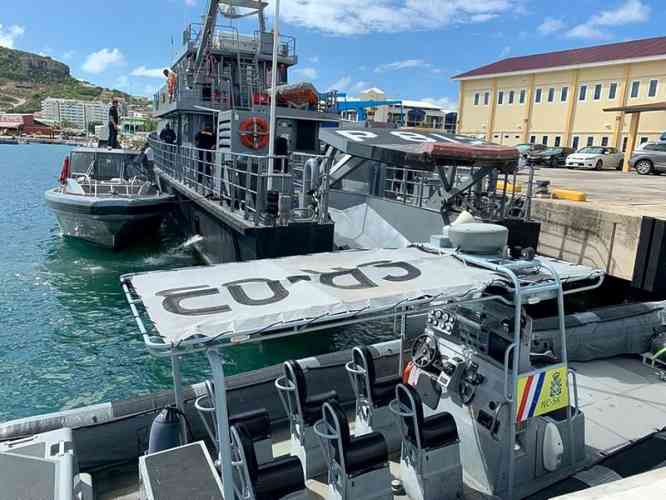 Minister of Justice Cornelius de Weever and Governor Eugene Holiday were among high-ranking officials who were present at the event.

Metal Shark is a diversified shipbuilder specialising in the design and efficient high-quality construction of welded aluminium and steel vessels from 16 feet to more than 300 feet for defence, law enforcement, and commercial operators.

According to the officials, these interceptors will become an asset to the Coast Guard with their fully-enclosed pilothouse which offers added protection for the crew, special glass which gives perfect visibility and full systems for night operations. The four new interceptors will collaborate to keep the beaches and seas safer.

Among the guests present were officials of the St. Maarten and Saba governments, and a group of 10 students of the Kidz at Sea programme. After the inaugural ceremony, the guests were invited on board of the cutter Poema which sailed in Simpson Bay Lagoon where the Metal Sharks gave a demonstration of agility and speed.

Composite armour panels provide ballistic crew protection, Shockwave Corbin shock-mitigating seating has been provided for a crew of six, and anti-fatigue floor covering has been employed in the pilothouse and the belowdecks crew spaces. For extended patrols at sea, accommodations include an enclosed head compartment, galley, and v-berth.

With the delivery of these four Metal Sharks, the DCCG now has twelve Metal Sharks operating in the territorial waters of Aruba, Bonaire, Curaçao, St. Eustatius, St. Maarten, and Saba, strengthening the Coast Guard presence in the Dutch Caribbean Sea. The new Metal Shark patrol boats were acquired by the Dutch Ministry of Defence to bolster its capabilities across the Caribbean.