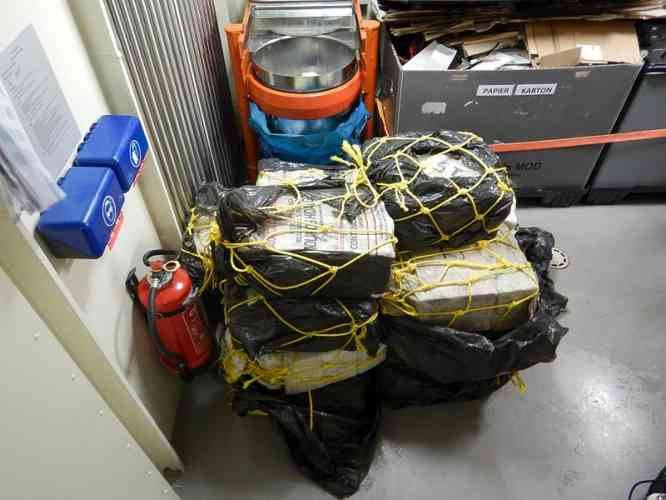 Drugs found on board one of the go-fast vessels last week.

After detecting the fast-moving vessels, the naval ship proceeded to intercept. A total of 424 kilogrammes (kg) of cocaine and a bag of cash were confiscated. The boats were seen jettisoning packages, but a thorough search of the area rendered no results. A person who jumped overboard was also apprehended safely during the bust.

The first interception took place on the night of July 10. A speedboat travelling at high speed was detected by Zr. Ms. Groningen. A fast raiding, interception and special forces craft (FRISC) managed to stop the boat and guide it to the naval ship for inspection. On board, 424kg of cocaine was found. The drugs and persons operating the vessel have been transferred to law enforcement authorities in St. Maarten.

The Zr. Ms. Groningen NH-90 helicopter observed a speedboat in the waters of the Caribbean Sea on July 12. It too was traveling at high speed. After the speedboat failed to respond to a stop call several times, a sharpshooter stationed in the helicopter fired on the vessel and disabled its outboard motor.

The Coast Guard found no contraband on board this vessel and it was suspected that the speedboat’s crew had already jettisoned its illegal cargo. A FRISC searched the area for contraband and did not encounter any drugs, but found a bag containing a large sum of money along the speedboat’s path. The money and the people on board have been transferred to law enforcement authorities in St. Maarten.

Also on July 12, the Dutch Caribbean Coast Guard’s Dash-8 aircraft discovered another speedboat. The Groningen’s NH-90 helicopter was subsequently sent into the air. This speedboat also did not respond to a call to stop, after which the sharpshooter in the helicopter used disabling fire to incapacitate the outboard motor.

During the action, it was observed that the crew of this speedboat also had jettisoned their cargo. No drugs were found during a search of the vessel. The persons in this last case, who were transferred to police on the island, were released on Monday due to a lack of evidence.

In all three cases, there was good collaboration with the Dutch Caribbean Coast Guard substation in St. Maarten.

The NH-90 helicopter saved the life of a person on board a capsized fishing vessel on Sunday. The drowning person was taken from the sea and brought to safety. An American Coast Guard helicopter rescued the three remaining crew members.

The Zr. Ms. Groningen has been active in the Caribbean Sea since April 20. It is deployed to act during counter-drug operations and to render humanitarian assistance. It is also used for various Dutch Caribbean Coast Guard tasks, such as the detection of illegal fishing, environmental crimes, and deployment during search and rescue cases. The Zr. Ms. Groningen is equipped with two FRISCs and an NH-90 helicopter to perform these operations.