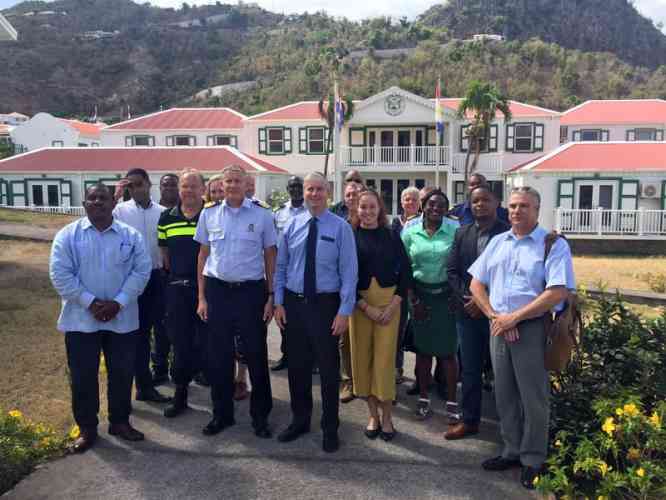 PHILIPSBURG–Representatives of the Dutch Caribbean Coast Guard (DCCG) and its Director Peter Jan de Vin paid a visit to Saba and St. Eustatius last Tuesday. The DCCG Head of Operations gave an explanation of the organisation’s policy, tasks and assets during a presentation to the island authorities. After the presentation, the new Metal Shark interceptors gave a demonstration of agility and speed.

The morning in Saba began with an extensive explanation by Island Secretary Tim Muller about Saba and its government. He spoke about the Saba economy, society and challenges they face on the island.

The DCCG presentation was provided by Head of Operations Ron Louwerse. After the presentation at the Government Administration Building there was a lot of time to ask questions.

The attendees – the Island and Executive Councils, representatives of the Caribbean Netherlands Police Force, the Fire Department and disaster management – were all involved during the presentation and question round. At the end of the presentation, the entire delegation went to Fort Bay Harbour where the Metal Sharks gave a demonstration and the authorities could go on a tour with the DCCG interceptors.

After the visit in Saba, the DCCG delegation travelled to Statia. In Statia, the DCCG gave the presentation to Government Commissioner Mervyn Stegers and a large group of local authority members who were present in the Government building conference room at Van Tonningenweg. After Louwerse finished the presentation, the attendees had the opportunity to ask questions.

Mervyn Stegers thanked the DCCG for the presentation and honoured Coast Guard substation in St. Maarten head Jocelyn Roberto Levenstone with a wooden plaque with Statia’s coat of arms. Levenstone thanked him for the gesture and promised he would visit Statia shortly to discuss further matters.

On arrival at the harbour, the delegation was welcomed by the Metal Shark team who gave an interesting demonstration of the interceptors.

It was a very fruitful working visit on the two islands where a great number of topics related to the DCCG work were discussed. The DCCG looks forward to a successful collaboration with the islands’ authorities.

The DCCG has 12 new Metal Sharks operating in the territorial waters of Aruba, Bonaire, Curaçao, Statia, St. Maarten, and Saba. The interceptors are an asset to the Coast Guard and have strengthened the DCCG presence in the Dutch Caribbean sea, according to DCCG Sunday.