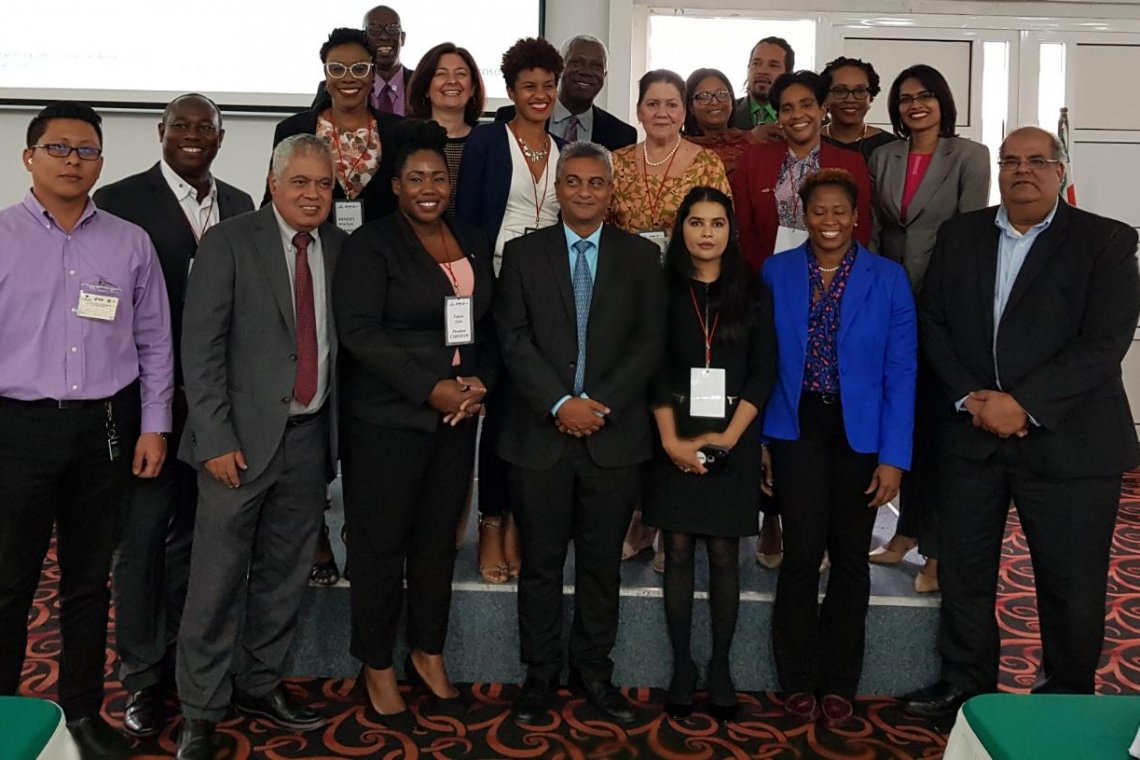 President of the COCI Board Benjamin Ortega (back row, second left) with other representatives of the region and from BRICS countries.

PHILIPSBURG–Representatives of the St. Maarten Chamber of Commerce and Industry (COCI) recently returned from attending the two-day Caribbean Chambers of Commerce CARICHAM-BRICS plus Conference 2020, held in Suriname on February 27 and 28.

The Suriname Chamber of Commerce and Industry coordinated the conference. BRICS plus refers to the countries of Brazil, Russia, India, China and South Africa.

There were two presentations on the first day of the conference, the first of which was themed: “Access to Finance and Opportunities for CARICHAM Members”.

The second presentation was themed: “Strengthen Business Relationship between CARICHAM and BRICS plus countries”. Presentations were given by representatives of BRICS as well as Indonesia with emphasis placed on doing business with these countries.

The second day of the conference was dedicated to doing business in the Caribbean with several Caribbean Chambers of Commerce making presentations. “This was a unique opportunity for St. Maarten to further profile our island as the friendly business island – a theme that was recently launched in the Netherlands during a collaborative mission between COCI, the Ministry of Tourism, Economic Affairs, Transport and Telecommunication of St. Maarten and the St. Maarten Ministry Plenipotentiary in The Hague, the Netherlands,” COCI President Benjamin Ortega said in a press release issued on Sunday.

“Our presentation geared to a project that was launched in 2018 by President Lint and Vice President Ortega in Suriname, where COCI introduced the need to strengthen ties with Caribbean countries and using St. Maarten as a hub within the network named The Business Ecosystem. It was then that St. Maarten and the Suriname Chamber signed a Memorandum of Understanding (MoU) to work together as described in the ecosystem.

“The presentation to the delegation of primarily Caribbean Community CARICOM states and the BRICS country representatives was well received, and many had shown further interest in working with St. Maarten,” said Ortega.

St. Maarten COCI became an official member of the CARICHAM Network in February 2020. CARICHAM was officially launched on April 1, 2019, to promote cooperation and collaboration between its 19 members within the Caribbean basin. The group also seeks to improve the levels of trade and investment within the region and between the region and other trading partners.

CARICHAM would represent the interest of the private sector on regional and international issues; facilitate capacity-building opportunities for members and representatives of the Chambers of Commerce; identify and undertake training, and facilitate other cooperation programmes that will benefit the membership of the chambers, as well as the next generation of Caribbean business leaders; foster innovation and strategic collaboration among members to increase global competitiveness of industries; develop and share business-to-business market intelligence; share experiences and best practices in areas such as trade and investment, renewable energy/energy efficiency, disaster risk reduction and climate change; and finally, add value as well as identify opportunities for the members of the respective chambers.