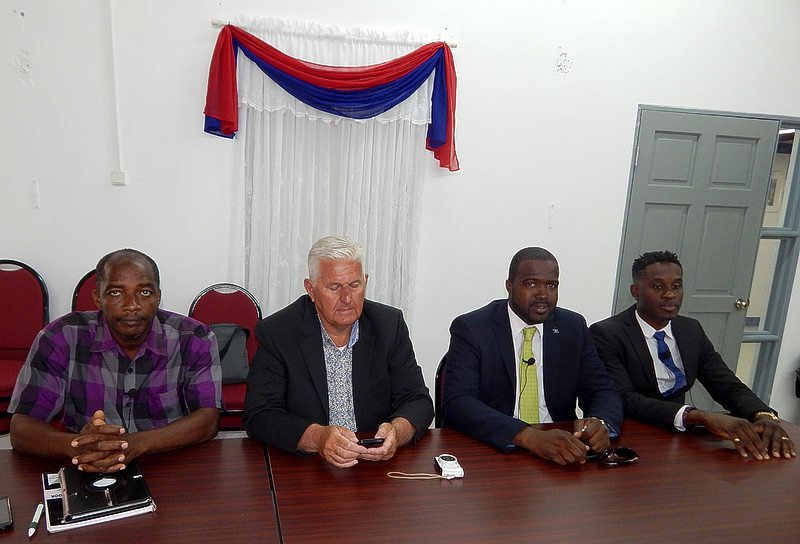 Reid said he was proud to have the support of local Government. “A lot of incentives, thought and planning have gone into the agriculture sector,” he said.

In 2016, the trend for farming has been increasing steadily, said Reid. There are now 74 registered farmers, animal owners, and fishermen on the island. “That is an increase of 14 from 2015,” Reid cited.

He stated that in 2016 these farmers have exported 39,000 pounds of meat from Statia to other islands, which is another increase from 2015.

Reid said Commissioner Woodley has given him a mandate to manage a new agricultural project in April. The intention of the new programme is to make sure that the three basic food groups, meat, starch, and vegetables, are produced on the island.

They have the manpower of 15 personnel to participate in the project, and have the finances and machinery, because investments in machinery were made in 2016. Now they will be setting up an irrigation system to start producing.

Reid said the project in collaboration with STEBA and New Challenges will help with a social-economic drive forward.

In 2016, there were 1,142 animals slaughtered on Statia, among which were 474 goats, 429 sheep and 153 cows. According to Reid, the meat industry is up and running. “Statia is able to produce enough meat to supply the island. We just have to make sure we put enough into the farming industry to make sure we have enough food to feed the country.”

LVV personnel were trained in the processing of meat by instructor Hans de Amooy from the Netherlands. A ceremony will take place today, Friday, to present certificates to staff members.

New Challenges is a non-profit foundation charged with giving young people without qualification a second chance in education.

“One of the avenues we have chosen has been agriculture. In 2005 we had the opportunity to introduce agriculture in a friendly manner to the island, via hydroponics,” Herbert said.

NuStar Statia Terminal contributed a greenhouse. The Ministry of Social Affairs and Employment in The Hague also contributed to the project.

They received training from the college in St. Kitts and went on their way, but due to setbacks from different pests attacking the product they were forced to revamp and put the project on hold. Since then a collaboration developed between New Challenges and LVV, which resulted in a greenhouse and two units in which to grow produce, such as tomatoes, cucumbers, lettuce, celery, and other vegetables. Local businesswoman Brooks manages the hydroponics operation. Due to financial constraints the hydroponics operation is not functioning optimally, but Herbert said the operation will prove to be viable and worthwhile soon.

Commissioner Woodley said Government freed up property and land to enable agriculture on a level at which local produce could feed the island’s population.

“In case there are any issues arising from the delayed delivery of goods for any reason, the island could go on without any interruption. We are taking a comprehensive approach to this because we want to assure better health for all. The projects will help persons become healthier, as knowing what is in your food encourages a healthy lifestyle,” the Commissioner said.

He encouraged farmers, fishermen and growers to take charge of their future and to invest in themselves.

“We are looking at ways to involve all foundations that fall under Government to help them offset their cost, so that they are not dependent on subsidies,” said Woodley.