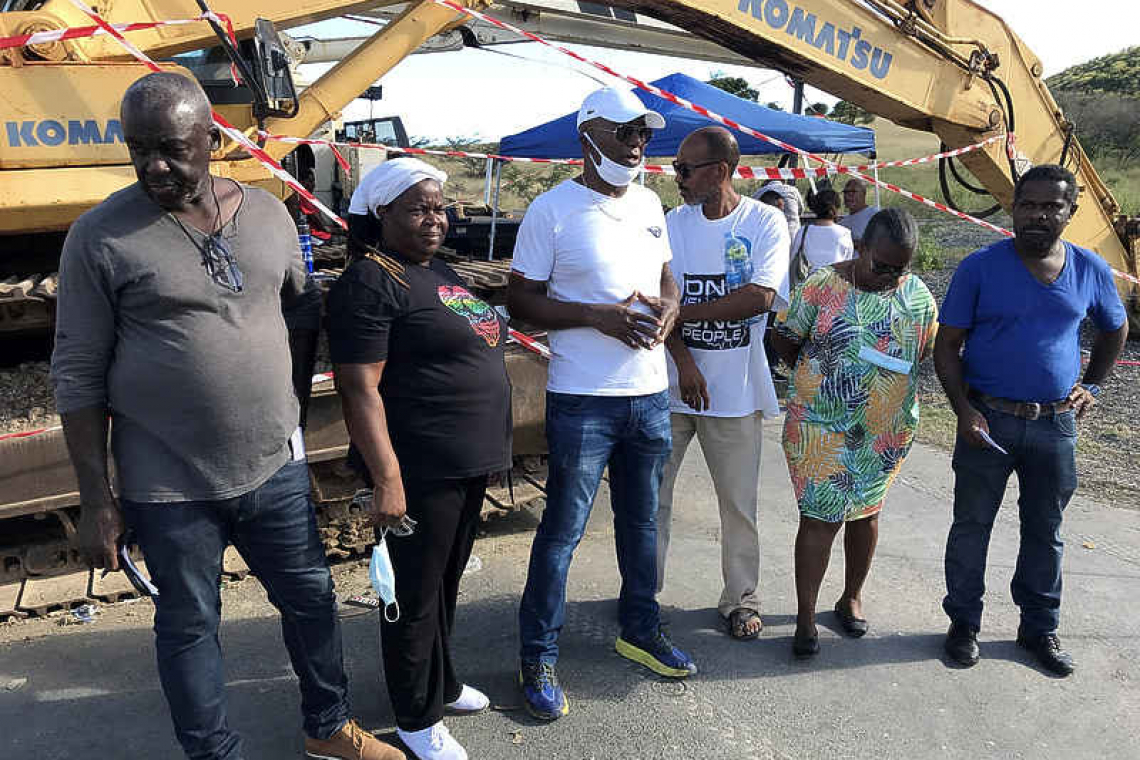 MARIGOT–Members of the collective of collectives united on Wednesday to condemn the auction of the Webster parcel of land in Griselle, Orient Bay, and demanded that the bidder retract the purchase while there are a few days left to do so.

The remaining part of the land parcel was sold at auction in Guadeloupe on Tuesday for 550,000 euros, yet the Webster family had legal title to the land and a deed.

“This is unacceptable, not only for the Webster family, but for the entire St. Martin people,” said Lenny Mussington. “This precedent means clearly that in this zone all those who have official title for the land cannot rest in peace because their land can be put on auction at any minute or hour. This is a serious threat to the rights of St. Martiners to own land in the country of their birth.”

According to the collective’s investigation, the purchaser of the land was listed as Billy Etienne from Les Hauts de Grand Case and SARL Immobilière Caraïbes.

“This person had the audacity to do this knowing that his action is a serious threat to the stability, security and peace of this country,” Mussington added. “We are calling on him peacefully to retract the bid and do the right thing to avoid an escalation of this protest. We can already feel the tension building in the community. This action is not conducive to constructing good relationships for a harmonious St. Martin. I repeat, this is a serious threat to anyone owning land in this zone, and other areas in the future.”

A mobilisation of the population to protest the auction is planned, most likely for this Friday, but is still to be confirmed. The collective is calling for massive support.

Other members of the collective voiced their opinions of what has transpired.  Francilène Paines said the fact the land was sold so cheaply, many times below the actual worth of prime real estate, was an “atrocity” in itself.

“This is now a St. Martin problem. We are under attack and have to stand up for our rights. Injustice for one is injustice for all,” she said.

Albert Blake of union UNI-T 978 asked what would become of people in Sandy Ground or French Quarter who don’t have title to their land if land can be taken away from someone who has title? “The people have been suffering from so many issues since Hurricane Irma and this is just adding to the suffering,” he said. “And why hasn’t the government intervened? The people have to wake up now, because we are fighting for our land.”

Freddy Richardson said that when the Collectivité and the State fail to take action to solve a problem, it is as usual left to the collectives to represent the people.

“Every time the collectives are present on an issue, they say we are inciting the youth to violence and destroying the economy, but if they were doing their jobs we would still have a decent economy,” Richardson argued.

Horace Whit’s remarks alluded to an ongoing strategy of forces at work to take over St. Martin.

“The State representative, the préfet, is absent in all this, so that leaves the people alone. This is what happened to the Websters – they had to take care of their own business because there was no one to defend them.

“The only people who own land in St. Martin are St. Martin people and the only reason outsiders were allowed to establish themselves here is because St. Martin people permitted it. But they are not getting this property, the line in the sand has been drawn. There are no leaders here in this country. We are defending our rights alone.”

Randy Webster said it is not only a land issue but a nationality issue. “As St. Martin people, we are being challenged. We are going to defend who we are. We are part of this land and will defend ourselves to the end.

“I would like to thank everybody who has been supporting us.”