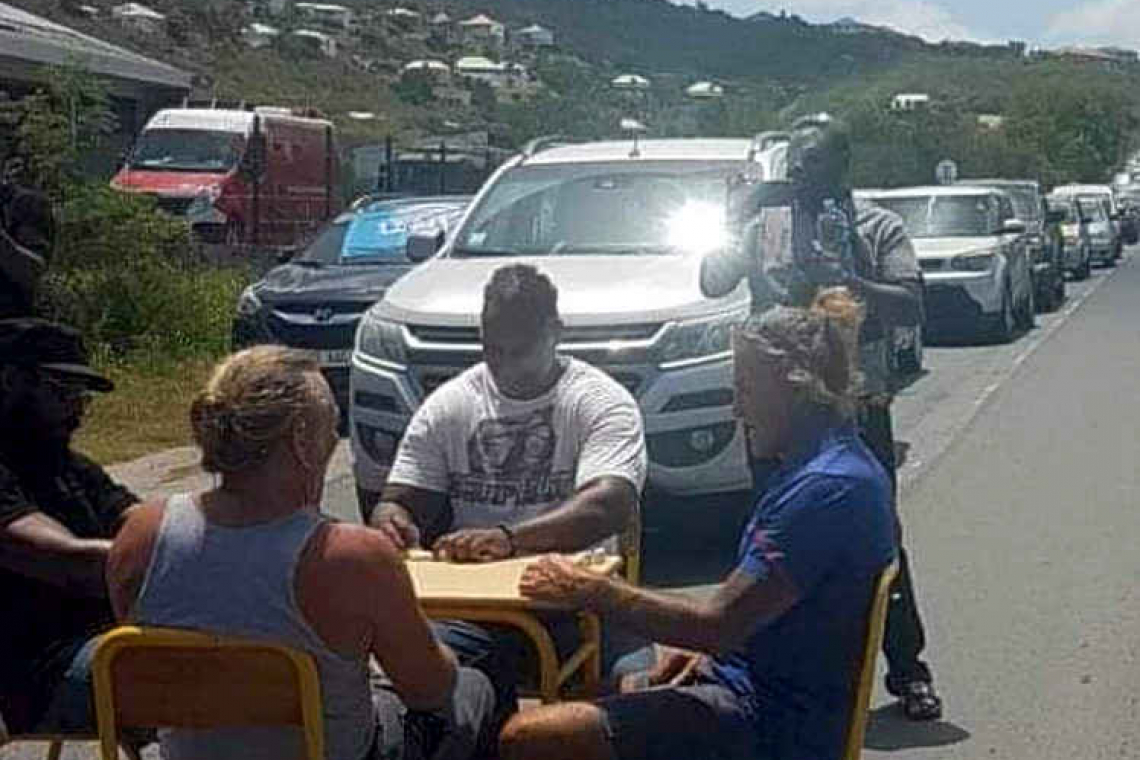 Men play dominos on a table in the middle of the road during the firefighter’s demonstration on Thursday. (St. Martin’s Week photo)

MARIGOT–The French side continues to remain in a tense atmosphere with the start of demonstrations against mandatory vaccinations by the firefighters (pompiers) on Thursday while the Unemployment Office (Pôle Emploi) also began a partial strike.

Firefighters and some categories of health workers are obliged to be fully vaccinated against COVID-19 by September 15 or risk losing their jobs and benefits as President of the Republic Emmanuel Macron’s controversial policy to reduce COVID-19 infections starts to bite in the overseas territories.

Firefighters are against forced vaccination, saying it infringes on individual rights and freedom to choose whether to vaccinate or not. SXM Resistance and Collectif Citoyen pour la Transparence de Saint-Martin (CCT) have posed a number of questions to the Regional Health Agency ARS and the Louis-Constant Fleming Hospital director on COVID-related statistics while SXM Resistance is also challenging the efficacy of vaccines and is against the proposed health pass.

Firefighters were camped out at the entrance to their La Savane headquarters. Traffic on the RN7 was stopped on two occasions during the day for about 15 minutes each time as a small group of protestors stood in the road with signs, chanting, “Don’t touch our firemen.” A table was also set up in the middle of the road for a game of dominos as cars were seen backed up all the way over the hill. Firefighters have vowed to escalate their protest if the vaccination measure is not relaxed.

Meanwhile, after a day off on Wednesday, the assembled members of the three collectives Soualiga United, Soualiga Grass Roots Movement and Union du Peuple Travailleurs St. Martinois (UPTSM) and union UNI.T 978 resumed the meetings with Préfet Serge Gouteyron and President Daniel Gibbs in the Préfecture on Thursday afternoon.

Gouteyron and Gibbs for a week now have agreed to address the grievances posed by the collectives. Negotiations have not gone well to date, with two meetings already aborted. Thursday was no different when the delegation walked out of the meeting after 15 minutes, when Gouteyron began to read out the “Protocole d’Accord”, which answered many of the grievances listed by the collectives.

“The préfet has presented a pre-defined protocol as he sees it, but it doesn’t work like that; each point has to be discussed together with us,” UPTSM’s Cédrick André told reporters outside the Prefecture. “This is another instance of the préfet dictating to us, for the second time. This is getting to be too much. If he doesn’t want St. Martin to move forward, then we will block the whole territory.”

Luc Wellington of UPTSM added: “This is the second time that when we agree on something and when it gets to the time of discussion, we are played a different hand. The préfet is demonstrating dictatorship, but we are here for peace. We are not afraid of the préfet and his entourage. We give the government the opportunity to represent us, but when it comes to abuse, we represent ourselves. When the time comes, we will do what we have to do. Nothing will stop us, not even an atomic bomb.”

Gouteyron continued to read out the protocol after the delegation had left the room, with just the media in attendance. He seemed unphased by the walkout. When the delegation did not return by 6:00pm he summoned the press to give a statement.

Gouteyron, with Gibbs at his side, said “many hours” of work had gone into the protocol to address the grievances or requests made by the collectives. Some of the points had already been addressed by the State or the Collectivité, or are in the process of being addressed, such as the “50 pas géometriques”.

On the obligation to vaccinate for certain professions, he said he does not have the authority to override a national decree by the French government. Other points in the protocol include the préfet’s pledge to reduce unemployment to below 20 per cent, and to set up a financial aid system for low-income inhabitants to protect their homes.

Regarding the Webster land affair, Gouteyron said a judge cannot intervene in what is essentially a private matter. And on the Director General of Services (DGS) issue (not part of the protocol) the union would have to take the person to court if she has done something wrong, otherwise neither préfet nor president can fire a civil servant without due cause.

The protocol was duly signed by Gouteyron and Gibbs, without the signatures of the collective members, although they still have the opportunity to sign.