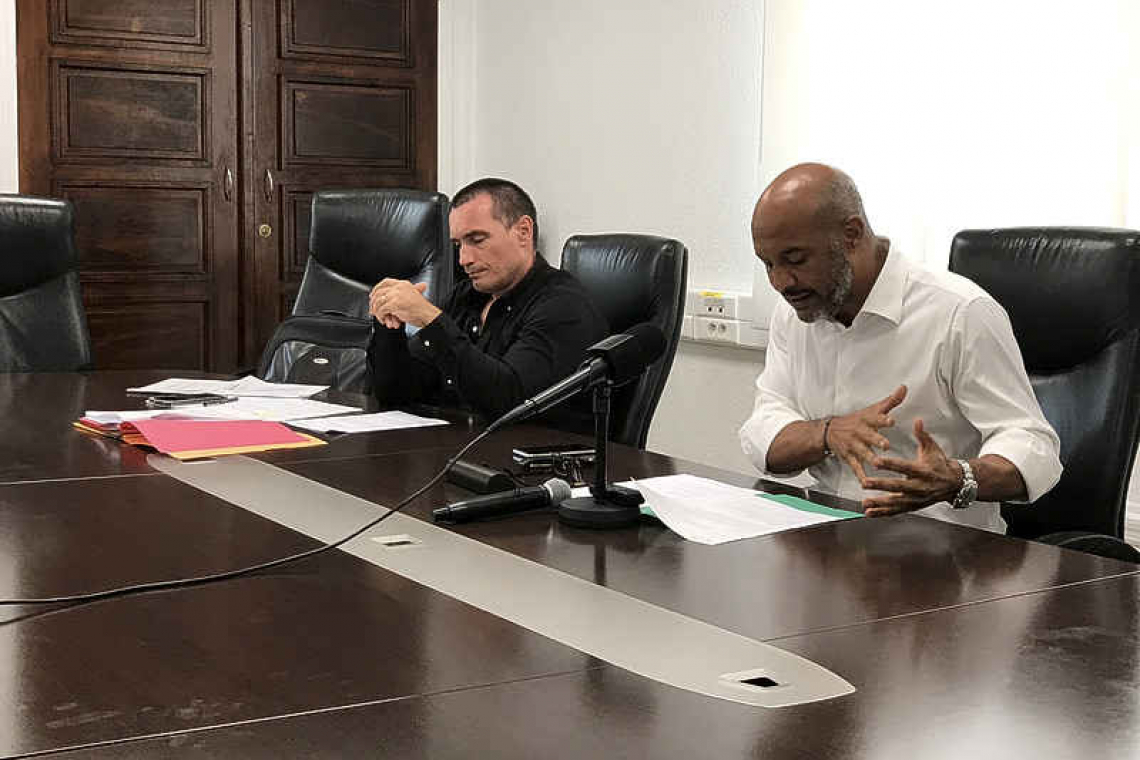 MARIGOT–Sandy Ground Bridge will be out of action from July 19 to mid-September to enable the final repairs to the structure and installation of new deck to be carried out, President Daniel Gibbs announced at a press conference Thursday.

The work will “solve once and for all” problems encountered for several years due to deterioration of the structure, he promised, noting the first phase of work on the bridge permitted a service to resume, albeit in a “degraded mode.”

The second phase of work consists essentially of replacing the drawbridge deck. It inevitably involves a complete interruption of road and sea traffic. However, a footbridge, running parallel with the existing bridge will be installed, for pedestrian and bicycle traffic only.

Consultation meetings have been held since October 2019 to plan this work and to coordinate the execution period, taking into account the routines of public services and movement of users during this work.

The overall cost of the operation, including studies, management and execution of the work, is 1.7 million euros financed by European Regional Development Funds (ERDF) for 58 per cent of the cost, and by the Collectivité for 42 per cent.

Gibbs reiterated this second phase of work implies a complete interruption of maritime traffic, between Monday, July 19, and Monday, September 20.

“I would like to stress on this point that marine trades association Métimer has been involved with the technical committees on the preparation of these works for 15 days, so that the association could inform mariners beforehand.

“There will also be a total interruption of road traffic, between Monday, August 9, and Wednesday, September 8. All motorised vehicles will have to take the detour via the Dutch side.”

Minibus rotations will be maintained during this period. Passengers will have to walk across the bridge to catch a bus which will be waiting on the other side to continue their route.

The collection of household waste, bulky items and plant waste, as well as the removal of car wrecks will be carried out at the usual intervals. The Gendarmerie and Territorial Police will have patrols in Sandy Ground to ensure footbridge rules are respected amid their normal duties.

Emergency vehicles, (fire, ambulance, emergency doctors, care home visits) must use the detour through the Dutch side. A specific traffic permit has been issued to the Collectivité by Dutch-side authorities for this purpose.

The work is estimated to be completed on September 8, but the Collectivité will hope to accelerate the work to re-open the bridge to road traffic as soon as September 2, for the beginning of the school year.

“This is major work that we had committed ourselves to carry out during this mandate,”

Gibbs added. “It will be completed. Only bad weather could delay us. I am aware of the inconvenience this represents for the inhabitants of Sandy Ground, Baie Nettlé and Terres-Basses and mariners, but these are works of general interest that have been requested for several years and which will significantly improve the daily life of citizens. In the long run, it will result in faster and more frequent bridge openings. I appeal to everyone’s patience during this period.”

Engineer Laurent Guillaume from the Collectivité’s Technical Services Department gave more details of the scope of the work involved.