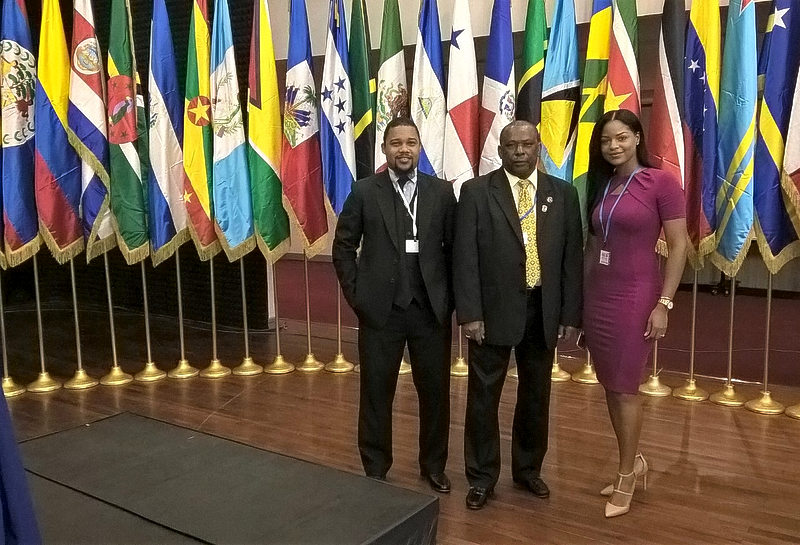 MARIGOT–Territorial Councillor in charge of cooperation Louis Fleming participated in the first cooperation conference for the Association of Caribbean States (ACS) in Havana, Cuba, on March 8, and also the 22nd meeting of the ACS Council of Ministers on March 10, 2017.

“Application by the Collectivité of St. Martin to be an associate member of the ACS at the seventh Summit of Heads of State of the ACS in June 2016 in Havana marked a decisive step forward in external action and the strategy of cooperation,” the Collectivité noted in a release. “Indeed, our Collectivité has resolutely entered regional integration at the heart of its development strategy and wishes to contribute to the building and strengthening of the greater Caribbean.

“Aware of its crucial role in this process, the ACS marked the 23rd year of its creation with a new dynamic and desire said to strengthen and expand relationships with its members and their partners. In addition, the ACS interacts with various agencies and social actors in the original areas of transport, sustainable tourism and trade to which were added reducing the risk of disasters and the fight against the effects of climate change. These reflect the importance our Governments attach to negative impacts on the Caribbean.”

The Cuban President of Council of Ministers of the Association and the Secretariat of the ACS decided to convene first conference of cooperation of the Caribbean to implement programmes of cooperation implemented by the association and to contribute to the mobilisation of resources for projects in progress and others likely to be proposed according to selected themes.

“This rendezvous was extended to other countries and international organisations, as well as to funding programmes and agencies of the United Nations (UN) who were specially invited due to the work carried out in the areas and fields of action of the ACS,” the Collectivité noted. “The opening also promoted alliances that can contribute to improving scientific, technological, cultural and economic growth of the Caribbean according to the sustainable development of the region.

“This first cooperation conference was an opportunity for the French overseas territories to highlight its skills in areas such as regional transport and combating climate change. The Collectivité of St. Martin is now more involved in this dynamic with its central position within the arc of the Antilles and proximity to the Caribbean-Atlantic-Pacific shipping lane,” the release concluded.