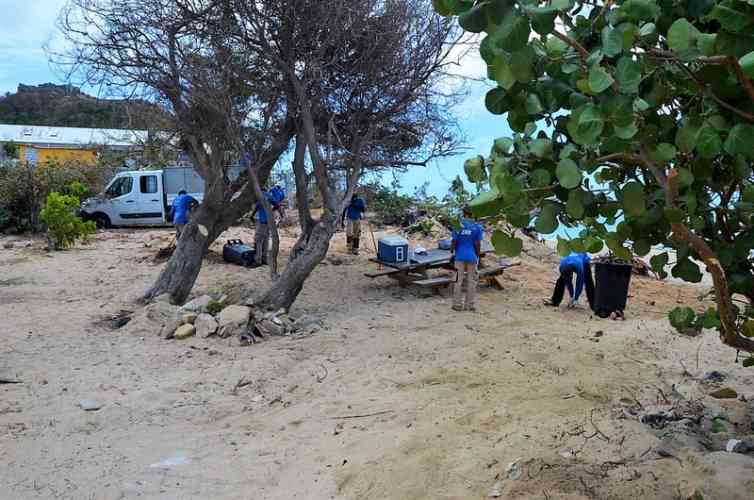 MARIGOT–The cleaning company EME was asked to carry out an immediate clean-up of the beaches as early as Tuesday morning after the Easter weekend to remove all rubbish left behind by campers, the Collectivité said Wednesday.

It said a considerable amount of garbage was left on beaches despite the skips and bins deposited for the purpose before the weekend.

A team of 10 workers was dispatched to clean the beaches of Galisbay, Friars Bay, Grand Case, Cul-de-Sac and Le Galion. By Tuesday afternoon all beaches had regained their original appearance.

The Collectivité reminds the population that it is up to everyone to preserve the environment. It regretted that there was again a lack of an eco-responsible attitude by campers to pick up their rubbish and throw it into the bins provided by the Collectivité before the Easter weekend.
“Despite a permanent awareness to respect the environment, too many people continue to ignore the rules and signs informing about the need to preserve our island,” the release stated. “The environmental police were instructed to verbalise offenders.”

Concerned about the cleanliness of the territory, the Collectivité awarded a public contract to the insertion company EME for the cleaning of the beaches after Hurricane Irma. This cleaning is still ongoing and will continue as needed.