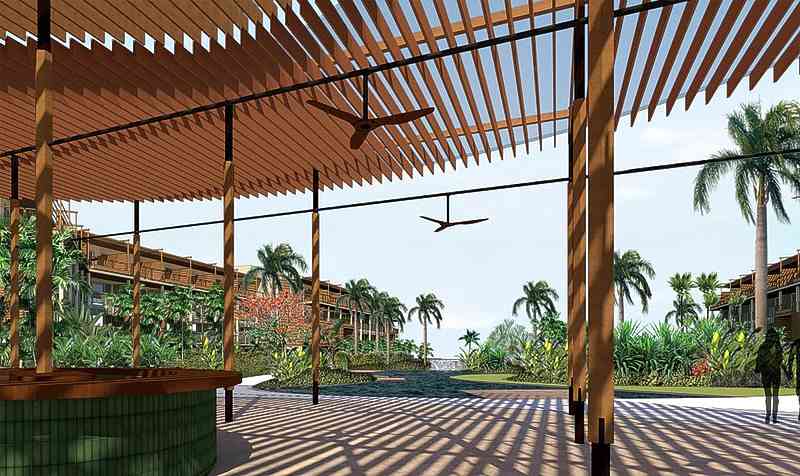 A visual of what the lobby of the Secrets St. Martin Resort and Spa, Anse Marcel, will look like.

MARIGOT–The Collectivité has confirmed that authorisation was given at an Executive Council meeting on May 27 to the Anse Marcel Secrets St. Martin Resort and Spa main contractor Banema.es to hire foreign workers for the hotel’s renovation, as the required number of local workers, and expertise, was not fully available from the Employment Office (Pôle Emploi).

After ensuring legal procedures had been followed to ensure the Employment Office had been consulted first, authorisation was given to issue permits (main-d’oeuvre étrangère) for four engineers, three construction site managers, 12 drywall workers, 11 carpenters/joiners, 21 masons, and 11 professional painters.

However, Pôle Emploi indicates requests were made for up to 200 foreign workers, suggesting more requests were subsequently submitted. The department confirmed that easier jobs were filled by local St. Martiners and more technical jobs sourced from foreign workers. It did not say what proportion of St. Martin workers were hired.

The former Riu Palace Hotel is under pressure to open on time in December 2019 and to take back all the former employees following the US $20-million renovation.

Meanwhile, Nicaraguan workers working at the hotel for subcontractor Internacional de Pinturas de Nicaragua, a painting company, have complained of exploitation, low pay and long hours, recently presenting their grievances to media on the Dutch side of the island. The workers are on short contracts and residing on the Dutch side. One worker said they are working from 7:00am to 8:00pm (13 hours).

A pay slip obtained by this newspaper from one worker indicated a monthly gross salary of $610 ($20.33 per day). After add-ons and deductions, the final amount this worker received was $729.73. Workers say they come into St. Maarten with $600 to show immigration they have means, but have to give this money back to the employer. Their passports are also taken away from them until their contracts are finished.

The Chamber of Commerce said the pay slip, if indeed genuine, does not respect the French laws in any way. Any foreign company having workers working in French territory has to abide by French laws in terms of pay, conditions of work, hours, vacation pay, social security, etc. Minimum pay on the French side is 10.03 euros per hour. Hours of work are 35-39 hours per week.

The Chamber did confirm that Banema.es is a Spanish company registered with the Chamber since December 2018 and supposedly paying its dues. This could not be verified, as that information is with the Fiscal Department and considered confidential.

A second group of Nicaraguan workers submitted a complaint of exploitation against their employers to the Immigration and Naturalisation Department (IND) on the Dutch side on May 29, but were referred back to the French authorities as they were working on the French side.

The Nicaraguan workers’ case has been taken up by Police aux Frontières (PAF) and an investigation is still ongoing.