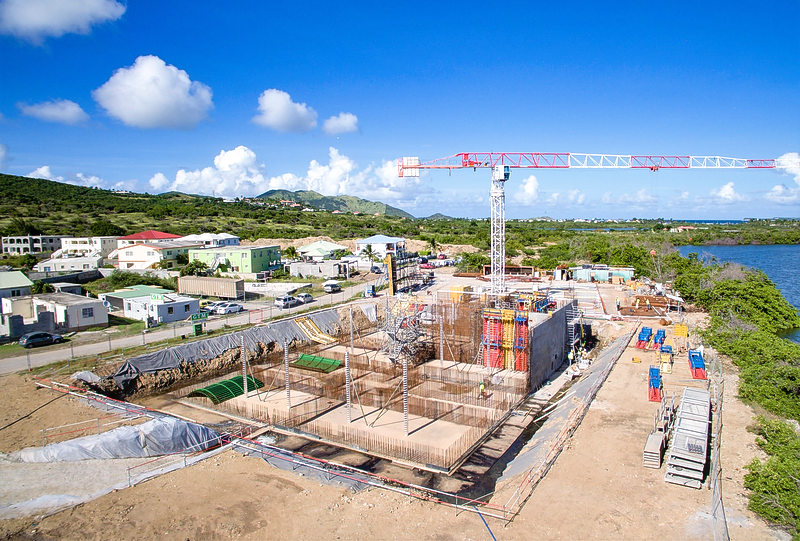 MARIGOT–President Aline Hanson recently led a delegation of technicians around the French side to view the projects that are currently under construction to evaluate their progress.

The visits began with the Jean-Louis Vanterpool Stadium in Marigot which is undergoing a major 2.3 million euro renovation involving complete covering of the basketball and volleyball courts adjacent to the ball field. =

The metal frame structure for the roof has already been erected. Lighting, electrical wiring and repairs to the courts have been done, and locker rooms will be installed before equipment and materials are moved in.

The project is expected to be completed at the end of April 2017. At this moment the stadium will not have a new field with synthetic grass but it has been planned for in the Collectivié’s next budget.

The visit continued with an inspection of Albéric Richards Stadium in Sandy Ground which has just reopened to clubs and associations. The stadium has been completely renovated at a cost of 1.1 million euros and has been passed by the Security Commission.

The playing field now has a synthetic grass surface, the same as Thelbert Carti Stadium, and changing rooms have been renovated. The stadium meets European standards and can accommodate national and international competitions. Only the lighting of the stadium has yet to be renovated, work on which will begin this year.

The President then visited French Quarter where the delegation inspected construction of the future wastewater treatment plant. This latest generation plant realised by Etablissemnt des Eaux et de L’Assainissement de St. Martin (EEASM) will treat wastewater for 18,000 inhabitants and its design has been totally integrated with the environment.

President of EEASM, Louis Fleming, and Director Patrick Lentz indicated the station will be located in planted ecosystems, guaranteeing perfect quality of rejected water. The work is underway and the plant is expected to be delivered at the end of 2017.

The visits ended with a stop at the sea pool at Le Galion installed in 2014 by the Collectivité. Adjacent to the pool, the Collectivité has built an aid station to provide security for the many school children who use the pool. The aid station will be opened very soon.