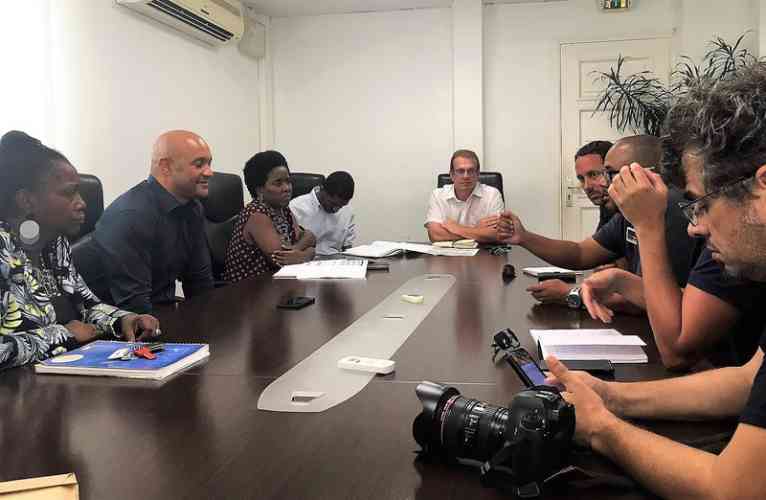 Meeting in progress between teacher’s union representatives and elected officials of the Collectivité.

MARIGOT–President Daniel Gibbs and Vice-President Annick Pétrus in charge of education received the representatives of the SNUIPT-FSU teachers’ unions on Thursday, March 22, in Hôtel de la Collectivité, following their support in St. Martin of a national strike movement.

“This constructive exchange with the teachers’ representatives made it possible to take stock of the situation of the schools six months after Irma,” the Collectivité said in a release. “President Gibbs began by reiterating the urgency of the situation facing the Collectivité, with 95 per cent of public buildings damaged by the hurricane (including three schools to be rebuilt and 18 to be renovated) and limited financial resources to carry out these operations.”

With schools having paid a heavy price, the President said he made reconstruction of schools and sports facilities his priority for 2018. Vice-President Pétrus recalled that since Irma, the Collectivité teams had worked tirelessly to get schools ready to welcome pupils and to eliminate the time rotations in most of the schools.

A work schedule was drawn up by the Collectivité to renovate all the establishments before the start of the September school year. Framework contracts have been awarded and work will begin during the Easter holidays and be completed in August. The Collectivité will do its best with the financial means at its disposal. Meetings are scheduled with all schools to maintain a dialogue.

On the question of the hourly rotations in the first degree, still effective in the schools of Grand Case and Sandy Ground, the elected representatives indicated they met the parents of pupils and the directors of schools in the presence of the representatives of the Rectorat and National Education to find adapted solutions.

The rotations will be cancelled in Grand Case from the beginning of the Easter holidays, and will be maintained until the end of June in the schools of Sandy Ground with the agreement of the parents.

The union representatives assured the President of their support, their goal being the same: an optimal September back-to-school season with student success at the end.

President Gibbs, who is part of the partnership, also undertook to keep the union representatives regularly informed of the progress of work in the schools to encourage permanent dialogue until the start of the September school year.