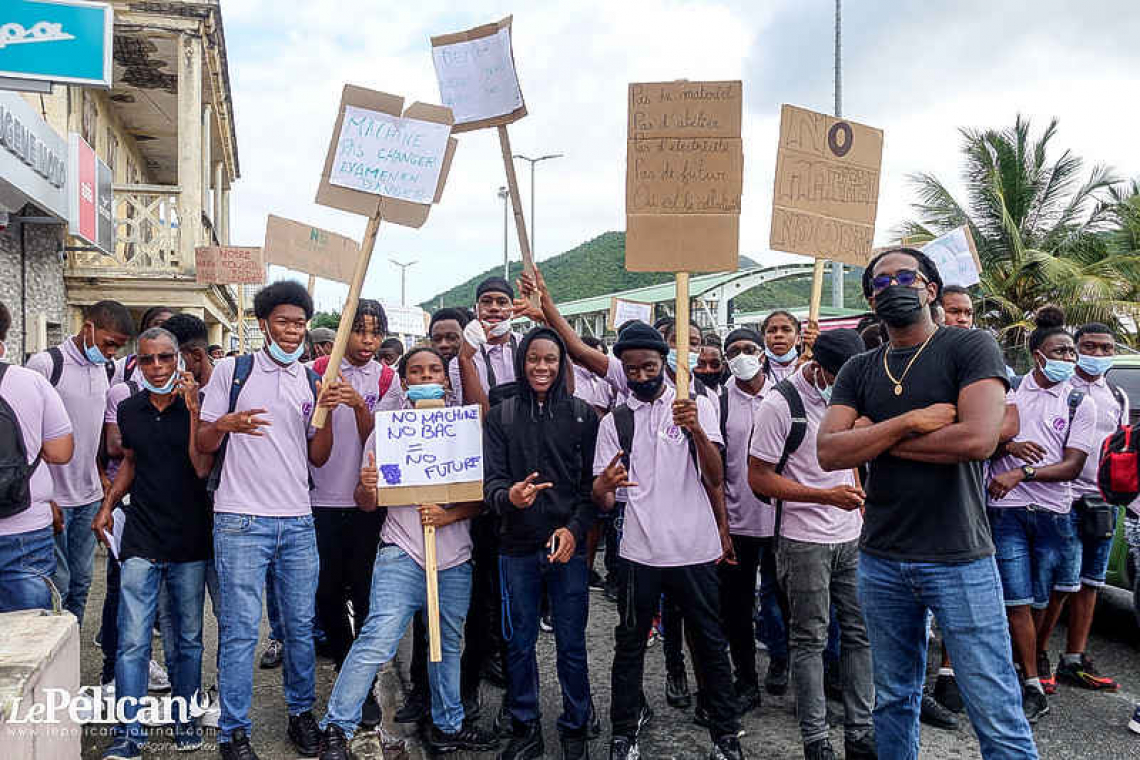 Some 200 Lyceé students and teachers marched to the Collectivité Thursday morning to protest the Collectivité’s not replacing defective machine tools for the vocational school’s woodworking and carpentry sections since Hurricane Irma. Apparently, there are only two usable machines left. A delegation was received by President Daniel Gibbs following the march (see related story), where it was disclosed the Executive Council had approved a 277,000-euro grant the day before to purchase the necessary machine tools as soon as possible. (Agathe Mathieu-Le Pélican photo)

MARIGOT–The Collectivité represented by Deputy Director General of the Human Development Department Jocelyn Elouin and Education Director Médhi Boucard, received a delegation from the Lycée Professionnel des Îles du Nord, in the presence of Vice-Rector Michel Sanz and teachers and students of the vocational school’s carpentry section, on Thursday, in response to the large demonstration and march held earlier in the morning by students.

Some 200 students and teachers were protesting that defective machine tools for the school’s carpentry and woodworking sections have never been replaced since Hurricane Irma.

President Daniel Gibbs met the delegation during a constructive meeting, to inform it of the decisions taken by the Collectivité to support the rehabilitation of the woodworking section and its will to create optimal learning conditions for the students.

As already announced in a press release, the Collectivité confirmed on January 10 that the Executive Council had voted to grant a subsidy of 277,038 euros to the Lycée to equip the woodworking apprenticeship section and buy the machines and tools necessary for the existing courses.

This point was clarified during the meeting with the delegation where it was acknowledged the school needed to buy the equipment it needs for the sections already installed and to equip students for the future Brevet Téchnicien Supérieur (BTS) course in woodworking at the start of the next school year.

The decision to award a grant was taken by unanimous vote at the Executive Council meeting on Wednesday, January 13. This grant will be paid to the vocational school as soon as possible.

The Collectivité has also undertaken to carry out a site visit as soon as possible, to draw up a joint inventory with the Lycée management of the work still to be carried out and to draw up an action plan to meet the school’s needs.

The same method will be applied to other schools. As a reminder, the Collectivité has invested more than 20 million euros in the reconstruction of the 18 schools following Hurricane Irma with support of European Union Solidarity Funds and has always been very attentive to the students’ situation.

Gibbs reminded the attendees of the numerous projects carried out by the Collectivité over the past three years.

“Everything is urgent and I know that sometimes things don’t go fast enough,” he said. “I want you to know that we are fully mobilised to resolve each situation and that we are doing everything we can to meet your expectations. This is true of this case today [Thursday – Ed.], which should be resolved very quickly.”