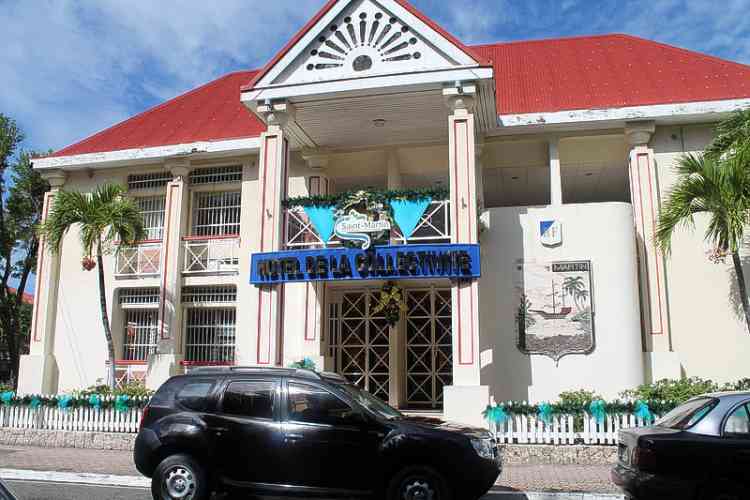 MARIGOT–Solutions were offered by the Collectivité to parents of children at Ghislaine Rogers and Elie Gibbs schools in Grand Case on Friday, to defuse a tense situation over complaints about the working/studying conditions of the schools, and the frustration of waiting for repairs to the buildings to start.

Despite a meeting with Third Vice-President in charge of education Annick Pétrus on Monday, with President of Caisse Territorial des Oeuvres Scolaires (CTOS) Maud Ascent-Gibs, following a demonstration in front of Hotel de la Collectivité, the parents’ collective was not satisfied. Elie Gibs School was closed Monday due to the strike action.

On Friday, however, parents from both schools were able to meet with Vice-President Yawo Nyuiadzi in the absence of President Daniel Gibbs and Annick Petrus, who is in Guadeloupe to meet with the new Recteur of the Guadeloupe Academy.
Vice-President Nyuiadzi was accompanied by Territorial Councillor Jean-Raymond Benjamin, Deputy Director General in charge of the Sustainable Development Department Romain Perreau, Director of Education Medhi Boucard, Director of CTOS Kenroy Bryan and François-Xavier Binvel, Deputy Director of Cabinet to the President.

After a silent walk, parents met with the Collectivité representatives who came to meet them on the Grand Case site. The discussion was constructive, with both Collectivité and parents wishing to improve the reception conditions for pupils of the two schools concerned. Vice-President Nyuiadzi acknowledged that in the urgency of many school files to be dealt with, the link with parents of pupils was not sufficiently maintained.
For better information, the Collectivité indicated it intends to set up an opportunity for dialogue with teaching staff and parents’ representatives to keep them informed of progress or difficulties encountered in rebuilding schools. Information meetings on the work will be held frequently.

Parents were also informed of the upcoming start of work in Grand Case schools. A delay was encountered for a few days due to the swells, and the inability of the cargo ships to deliver the ordered materials.

A meeting is therefore scheduled for Monday, March 12, in Hotel de la Collectivité with representatives of Grand Case parents to present the work projects.
More generally, the Collectivité is committed to communicating regularly on the progress of school projects. President Gibbs announced as early as November he will not accept a partial back-to-school in September 2018, and that the Collectivité will do everything in its power to move forward in this direction with the Rectorat and the services of the State.