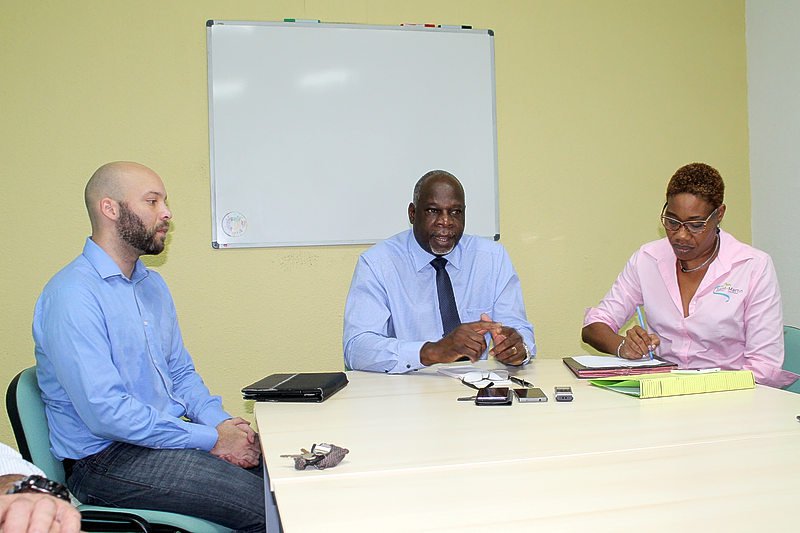 Arnell was accompanied by Chef du Service for the population census and addresses and cadastral services, Rosette Parotte, and representative Louis Musquet from the Guadeloupe firm Urbis whose team will be carrying out the work.

“For some time the Collectivité has been working on the optimisation of addresses in St. Martin,” Arnell explained. “The objective is for government administrative services, post office, EDF etc. to easily find citizens with correct names and addresses, which is not always the case now.  All of our streets must have a name, and street numbers must be consistent.

“One of the main problems is duplication, for example when you have three or four Impasse Antoine Gumbs it is impossible for the mail to find the right destination. This can also be a problem when ordering from the Internet.”

Rosette Parotte indicated some streets already christened will have to be renamed.

“We are forced to because there are duplicates of names such as Hunt, Fleming, Gumbs. The automatic address system only takes the surname. If you want to make a purchase on the Internet and say your name is Brooks the purchase won’t get to the address because we have Brooks in St. Louis, Brooks in La Savane, Brooks in French Quarter and Brooks in Grand Case. I have a lot of people who complain about this.”

The Urbis team will be tasked with removing duplicate street names and also locating and eliminating false addresses.

The work is expected to last two to three months, in two phases. The second phase of the project is to input addresses into a data base for Global Positioning by Satellite (GPS) for use with Google Earth for example.