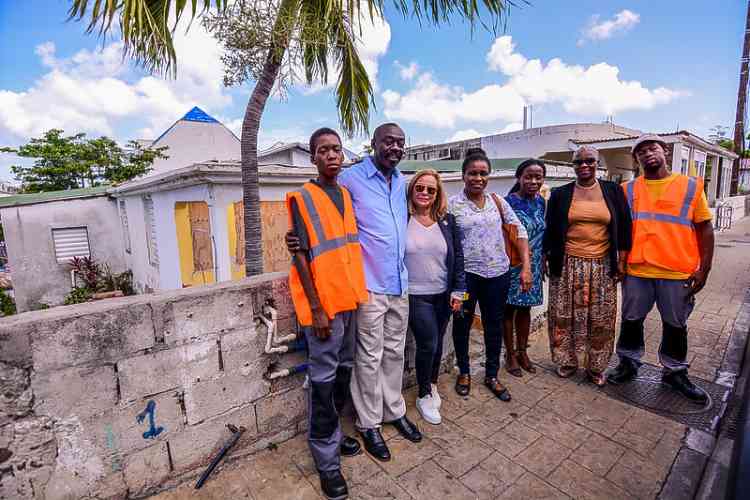 MARIGOT–One of St. James most admired citizens Veronique Javois is to have her house at No. 67, Rue St. James, rebuilt thanks to the initiative of district five’s Association SXM Horizon and the collaboration of willing partners.

Javois celebrated her 99th birthday last year on May 18 but her house was destroyed during Hurricane Irma. She has since been living with family members. Considering her 100th birthday is coming up it was decided to make a special effort to rebuild her home.
“It has taken us a while, but now we have a team together; a contractor, engineer and architect with the whole plan in place,” said district five representative Paul Whit. “I must say that the Collectivité is also contributing to this effort. We have also complied with the law in regard to the building code and did everything we had to do, submitting the building permit, etcetera, in the legal manner.

The cost of the building project is about 80,000 euros, Whit added. “The house is about 80 years old but the objective is to save some of the original structure and that takes some special reinforcement. It is hoped the work will start this week.

“Miss Veronique has contributed so much to this country in her lifetime and these are the people we must invest in,” he said. “We owe it to them. And we know that she wants to get back into her home. We heard this a lot from the elderly that they wanted to get back into their homes as soon as possible after the hurricane.”

Whit said he is appealing to the generosity of the community or businesses to assist with the furnishing of the house and supplying the basic appliances such as fridge, stove, washing machine. Donations can be made at the district’s office on Rue de Hollande.
He also disclosed that two young people from the association will be employed on the house rebuilding project.

The contractor for the construction is Rigobert Benjamin from Omega Enterprises. The engineer is M. de la Haye and Interior decorator Estella Leinster.