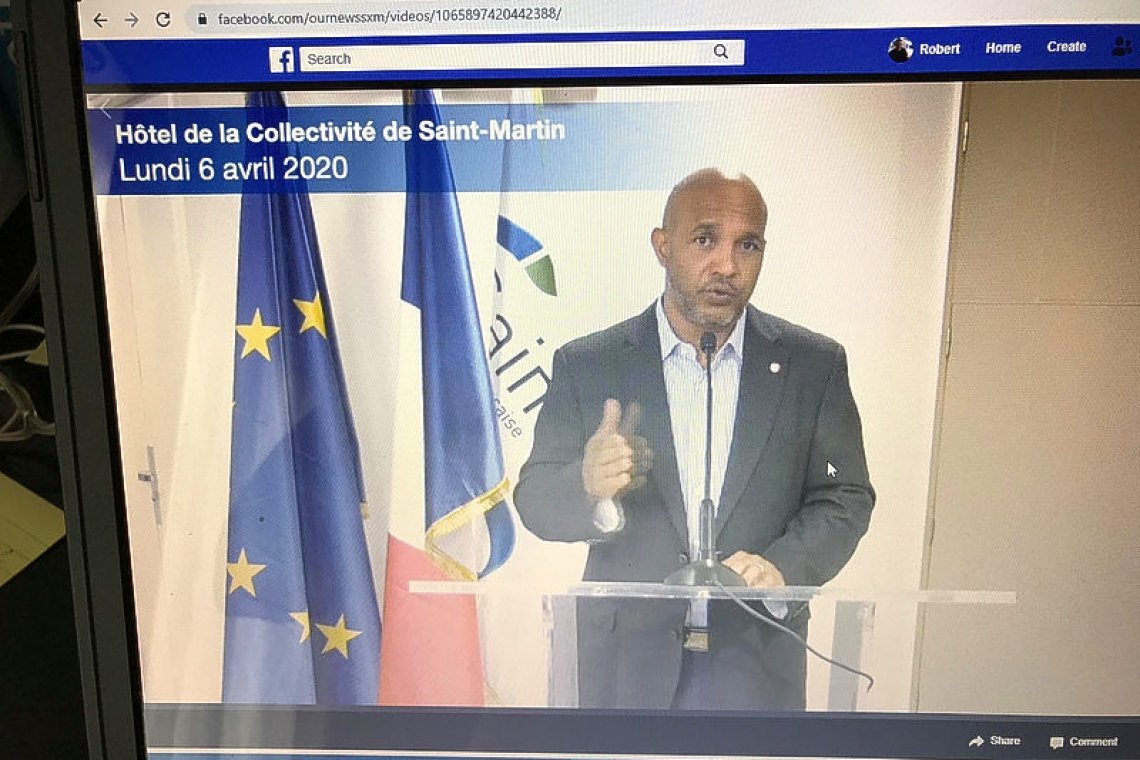 MARIGOT—President Daniel Gibbs and First Vice-President Valérie Damaseau delivered the first of their weekly addresses via the Facebook page of the Collectivité on Monday to update the population.

Since the beginning of March, an emergency operation has been set up within the administration. Certain services of the Collectivité are currently tele-working, while others are intervening directly on the field or are stationed at remote offices.

Hotlines are open to the public every day for emergency administrative formalities and these can be found on the website and Facebook page for more detailed information on the services put at your disposal.

“The safety of our personnel is a top priority, equipment and protective gear has been provided,” said Gibbs. “In collaboration with the State services, 20,000 masks, gloves, hydro-alcoholic gel and sufficient hand soap have been ordered to ensure optimum safety of our employees.

“A first stock of 3,800 masks was received on April 2 and was distributed to our staff, but also to the Fire Department, the Bethany Retirement Home and the Hospital.”

A car wreck removal operation has begun in Sandy Ground this morning and will proceed to all district.

Repairs to the Sandy Ground Bridge are currently stopped as the contractor has difficulties keeping his staff in activity and in supplying the site. The remaining work to open the bridge is estimated to take two weeks and will be restarted as soon as possible.

Work on Thelbert Carti stadium and Paradis Ravine have been stopped for the same reasons.  Contractors have to comply with the hygiene and social distancing measures adopted to combat the spread of the virus.

Work on Marina Fort Louis has also stopped but administrative work continues. Burial works of cable networks on Morne Valois continues as operational conditions allow the implementation of distancing and hygiene measures. To complete this project as quickly as possible, the company has concentrated all of its resources on this public operation.

The works carried out for the Waste Water Treatment Plant in Grand-Case are continuing giving priority on the streets closest to the schools: Rue des Ecoles and the Passage des Ecoles. In parallel with this phase of work around the schools, the stakeholders – Collectivité, water authority EEASM, Project Managers and companies – are examining the possibility of organizing, in this context of crisis, the logistics of delivery of specific material to start work on the Grand-Case Boulevard. A schedule will be established at the end of the week.

Distance learning: “Confinement is difficult enough for adults, but it must imperatively be respected; it also applies to children who do not always understand this deprivation of liberty. Distance education is a new concept for them, sometimes tedious, but they must have the courage to persevere.

“We salute here the teachers and the directors of the school establishments who do their utmost to accompany the students. This is an unprecedented situation to which we must adapt. In collaboration with the National Education Department, a list of students in their final year of high school and BTS, already identified by the Rectorat, will receive digital tablets from the Collectivité. The legal framework to put this measure in place is in process.

“The Internet operators of the territory have been solicited to ensure a better Internet coverage for our population. The President is regularly in contact with the French overseas departments and other departments, so that St. Martin receives the same treatment as other regions.”

The Collectivité and its elected officials are mobilized to respond to many emergencies caused by this health crisis.

“We want to express our sincere gratitude and respect to those who follow the strict confinement guidelines, as they help reduce the spread of the virus and save lives. To the others, thankfully less numerous, we ask them to act more responsibly and to understand how their actions affect everyone.

“This cannot be taken lightly. Though we are thousands of kilometers away from Europe or the United States, I assure you we face the same risks. Together, we have already overcome several hardships, we are now again facing an unprecedented global health crisis. Though health is a competence of the French State, the Collectivité has a decisive role to play in specific areas of its field of competences.

“Supporting the most disadvantaged and providing assistance to businesses in difficulty are at the heart of our political action. And we measure every day the means that must be quickly initiated to respond to this collective crisis.”

January 23, 2021
0
THE HAGUE--The Dutch government confirmed on Friday that the mandatory negative polymerase chain reaction (PCR) test and the rapid antigen test to enter the Netherlands will not apply to passengers and crews on flights from the Dutch Caribbean to...
Read more