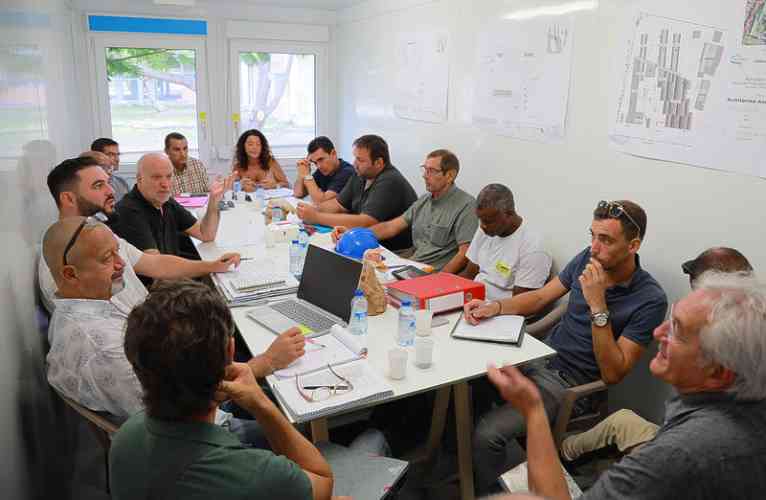 Meeting in progress for the reconstruction of the Lycée in Concordia.

MARIGOT–President Daniel Gibbs and Third Vice-President in charge of Education and School Affairs Annick Petrus, have given an update on the reconstruction of first- and second-level schools, following several meetings held during the school year with the State and National Education services and representatives of teachers and parents.

On Friday, June 28, Vice-President Pétrus met with the school community at Cité Scolaire Robert Weinum, alongside representatives of National Education Department, to provide factual information to teachers and parents on the work planned during the summer holidays.

Director of the Project for the Reconstruction of the Education System in St. Martin, Christian Climent-Pons, and reconstruction expert of the French Development Agency, Jean-Sébastien Roca, came to strengthen the supervision of operations in close collaboration with Director of the Sustainable Development Department Romain Perreau, under the authority of Vice-President Steven Patrick, Gibbs and Vice-President Pétrus.

Despite the administrative and technical difficulties encountered in the reconstruction phase of the 14 primary schools and five secondary schools damaged by Irma, the Collectivité and its partners have maintained reconstruction efforts with funding from the European Union Solidarity Fund (EUSF).

Phase 1 of the work, which consisted of a series of precautionary measures and the repair of schools during the 2018/2019 school year (during the students’ vacation period), has now been completed. Phase 2, currently in progress, will see all schools rehabilitated during the school holidays for delivery at the beginning of September for some, and at the end of 2019 for the others. As the intervention of companies in occupied schools creates constraints in terms of accessibility and safety, the intervention schedules have been adapted by concentrating heavy machinery work during the summer holiday period.

Work in primary schools is scheduled until the end of the calendar year, unless otherwise specified. It will be mostly completed for the school year in September, with additional work in some schools to be completed before the end of 2019.

The Collectivité has committed the following amounts for the repair of secondary schools: Collège de Quartier d’Orléans: 623,779 euros (work from May to September). A second phase consists of building a new school, in order to provide students with optimal educational and learning conditions. An architectural competition will also be published in the coming weeks to replace 35 classrooms. A modern gymnasium with a dojo and climbing wall is part of this operation. The technical file was finalized and approved by the Executive Council on June 12, with allocation of 7.7 million euros for this project, which will meet environmental protection standards. This project will be co-financed by the State and the European Union.

Landscaped areas and gardens will also be created to improve the comfort of students and educational and teaching staff. The commissioning of the new Collège in the Quartier

Collège Mont des Accords de Marigot: 4,285,668 euros (Phase three of work from January to September); Collège Soualiga: Implementation of 14 modular classrooms to be delivered at the beginning of the All Saints’ Day holiday in November 2019; Lycée in Concordia: 5,885,270 euros (Phase three: heavy work from January to September). Some finishes and the multi-purpose room will be delivered during the third quarter of 2019; Cité Scolaire Robert Weinum in la Savane: 1,733,394 euros (work from July to November).

The Collectivité also plans to build a new College for 900 students. Technical programming has been completed. The architectural competition will be launched in the coming weeks after the signature of the agreement with the State which will allow the Collectivité to receive 18 million euros in financial support for creation of a high-tech college to meet environmental standards.

This project was also the subject of extensive consultation with the school community during 2018-2019. This investment is estimated at 21 million euros. Work is scheduled to start in the first quarter of 2020 for full completion in August 2022

Presently, and during the next two months (July and August), 11 reconstruction projects are underway in public institutions in St. Martin for a total amount of around 14 million euros. Several local companies are involved on these sites, giving opportunity to a large number of St. Martiners to participate in the reconstruction of school infrastructure and to be trained in masonry, carpentry, roofing, waterproofing, carpentry, plastering, tiling or painting.

The Collectivité also committed 1,078,803 euros for the renovation of school sports facilities between September and December.