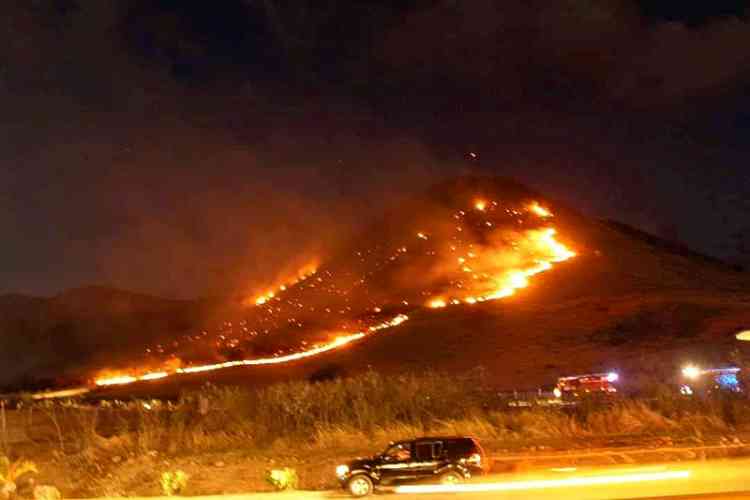 An extensive brush fire broke out on the mountainside opposite Grand Case Airport around 6:30pm Friday. Capitaine Arnaud Gerard said the back road between Hope Estate and Grand Case Airport was closed to allow access for the fire trucks. Three fire trucks and firemen were dispatched to the scene. The fire was being fanned by the wind and was later brought under control. The land belongs to the Laurence family. Story on page . Photo by Ronny Busby (Facebook).

MARIGOT–The French-side Fire Brigade has been called out to put out occasional brush fires during recent weeks. The dryness of the vegetation combined with episodes of strong winds present a dangerous fire risk.

The island is currently suffering from a lack of rainfall and an increasingly severe drought. High temperatures, dry soil and vegetation are conducive to fire outbreaks.

The population is invited to observe these simple precautions:

Smoking of cigarettes is not allowed in dry areas and cigarette-butts should not be thrown along roadsides, hedges or brush.

Precautions must be taken when using barbecues. In particular, this must be done in a protected area, away from vegetation and with a fire extinguisher or sufficient water nearby and ready if needed.

Bonfires are prohibited in gardens and fields during periods of drought.

The Collectivité therefore invites the population to be very vigilant.