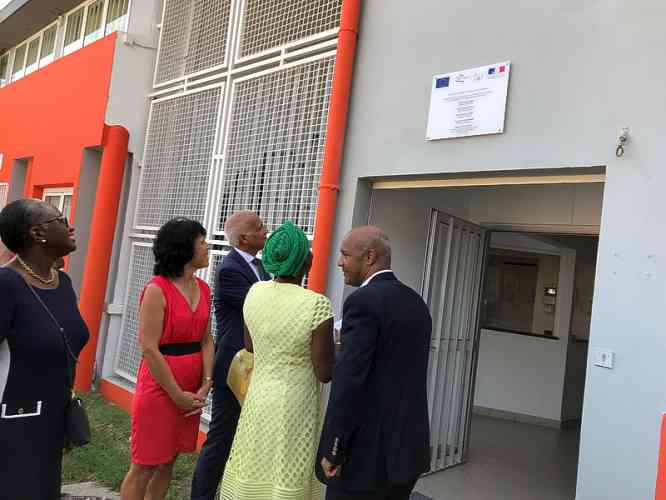 MARIGOT–Collège Mont des Accords in Concordia was inaugurated with a ribbon cutting and unveiling of a plaque on Friday, following a close to four-million-euro renovation that has taken the best part of two years. Coincidentally, it is also the 40th anniversary of the Collège.

The ceremony was attended by Préfète Sylvie Feucher, President Daniel Gibbs, Députée Claire Guion-Firmin, Recteur of Guadeloupe Academy Mostafa Fourar, the heads of education in St. Martin, Collège Principal Suzelle Karam and many of the teachers.

With the school year starting on September 2 for most establishments, the timing could not be better. The ribbon cutting symbolized the Collège as one of a handful of establishments that warrant recognition for the considerable effort that went into getting schools ready for the 2019/2020 year. By the end of this year, some 14 million euros will have been spent on reconstructing schools.

Director of the Human Development Department Thierry Gombs gave an entertaining and interesting perspective on the history of the College since its inception in 1979, noting along the way that he, Daniel Gibbs, Vice-President Steven Patrick, and other well-known names were once pupils of the Collège.

Congratulatory speeches were given by Recteur Mostafa Fourar and Gibbs, while Karam expressed her great appreciation for the reconstruction work. Gibbs reminded that three schools had to be demolished after the hurricane, such was their damage, but those pupils were integrated into the other schools.

“We have had to deal with dysfunctions, delays, and setbacks… not everything has been perfect, far from it,” admitted Gibbs in his address. But we put our hearts to work because the reconstruction of schools has always been one of our highest priorities.

“This morning, I sincerely wish to thank the team in charge of rebuilding schools within the Collectivité; Romain Perreau and his team under Vice-President Steven Patrick, Jean-Sébastien Roca of the French Development Agency (AFD), who, through his expertise, provided us with valuable assistance in terms of the scope of the work. Christian Climent-Pons, in charge of reconstruction for the National Education, who is accompanying us with dedication, with the support of the Recteur and his services.

“And of course, my Vice-President Annick Pétrus who has spared no effort with her services to advance the work of our schools. Every day I measure the magnitude of the task and the patience shown by the educational body, the students and their parents. We are coming to the end of a long road, even if there are still finishing touches and small works to be completed. They will be finalized for the return from the All Saints’ Day (Toussaint) holidays.

Some work is still in progress, particularly at Lycée Polyvalent and Cité Scolaire… I remind you that the major work has been completed and that the schools will be cleaned and made operational before the start of the school year. It will not jeopardise the studies of students.”

Ending of the second phase of the Collège reconstruction in August has seen all roofs and guttering replaced, electrical networks brought up to standard, and a complete renovation and painting of the building facades.

Addressing the Principal and teachers, Gibbs said: “You will have the pleasure of working in a completely refurbished facility. You deserve to be able to work under optimal conditions. I am also counting on you to tell students to respect the work that has been done, have respect for those who worked to achieve this result. I am thinking of the Collectivité’s staff, architects and partner companies, but also of the Rectorat and the school’s management and staff. The hardest part is behind us, the objective now is to work hand in hand to ensure the success of our students.”

In his address, the Recteur said his overall impression was that back to school next week will be “close to normal.”

“You have continued to work with dignity, serenity and calm, despite the difficult conditions you have experienced because of the importance you attach to education,” he told Principal Karam and teachers. “Today, that difficult situation is behind us.”

Fourar thanked the Collectivité partners in education and also Fondation de France, Roca from Agence Française du Developpement (AFD), and Climens-Pons who was in charge of reconstruction of the schools, for their support.