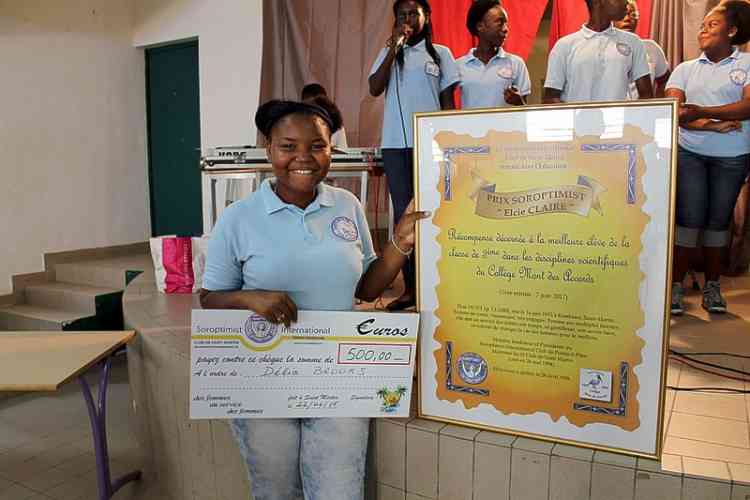 MARIGOT–Collège Mont des Accords student Délia Brooks was presented with the Soroptimist Elcie Claire award for excellence in her scientific studies throughout the year at a ceremony held in the Collège on Friday.

It’s the second consecutive year Soroptimist International Club of St. Martin has presented the award which always goes to the College’s best female student in the third grade.

“The mission of Soroptimists is to promote the status of women and girls, and empower them,” noted Hamlet. “Investing in education is also a way to fight injustice against women.”

Aside from Hamlet, congratulatory remarks were made by Collège Principal Suzelle Dorvil-Karam and President of Soroptimists Club Louise Carter.

Delia (15) was visibly delighted to receive the award, surrounded by Soroptimist board members and her parents, Jacqueline and Donald Brooks.

“She’s always been a hard worker from small,” said Jacqueline Brooks of her daughter afterwards. “First, she wanted to be a teacher, then a pilot, so we don’t know yet what she will end up doing. But she does want to continue her studies in Canada.”

The award ceremony included a musical interlude with students singing “Stand by Me” accompanied by drums and keyboards.

The prize is named after the late Elcie Claire from Rambaud, the godmother of Soroptimist Club and aunt of Ammique Bryan who founded the club in St. Martin in 1994. Elcie Claire belonged to the Club of Pointe-à-Pitre. She passed away on April 28, 1998.

Soroptimist International (SI), created in the USA in 1921 and in 1924 in France, is a world organisation engaged in creating a better world for women and young girls in professional and social affairs by promoting education, autonomy and leadership.

Through its clubs worldwide it supports causes and finances projects directly or in partnership. SI has 75,000 members in 123 countries. The United Nations (UN) proclaimed the first International Day for Women and Girls in Science on February 11, 2016.

Mixed feelings about direct flight between St. Eustatius and Bonaire | THE DAILY HERALD

December 1, 2020
0
The Emergency Operations Center (EOC) in a meeting on July 27, which was called to discuss a developing tropical cyclone that was threatening the...