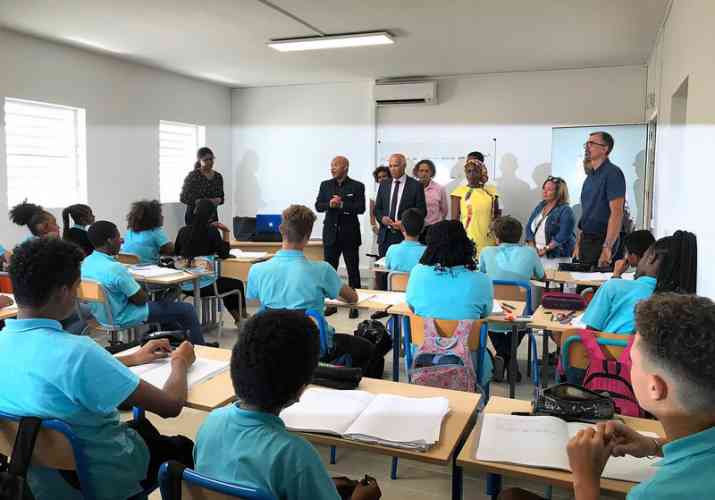 MARIGOT–President Daniel Gibbs and the Recteur of Guadeloupe Mostafa Fourar visited Cité Scolaire Robert Weinum on Monday, April 1, to see the six new prefabricated classrooms ordered as an extension to the building to accommodate students from Collège Soualiga whose school in Cul-de-Sac was destroyed by the 2017 hurricane.

The President and the Recteur were accompanied by Vice-President in charge of Education, Annick Pétrus and Head of Education for St. Martin and St. Barths, Michel Sanz.

Since the beginning of the school year in November 2017, Soualiga middle school students have been housed in the Robert Weinum school complex in La Savane which houses a Lycée and two Collèges. The Collectivité had therefore committed itself, with the support of Fondation de France, to purchasing prefabricated classrooms to increase the school’s capacity.

The delivery of the six classrooms was considerably delayed due to logistical problems that disrupted the school year. These six air-conditioned teaching spaces are now operational and students were able to start classes in them on Monday morning.

Apart from a leaking air conditioner in one of the classrooms (which will be changed tomorrow), integration of the new classes went very well for all the students. The rooms have a surface area of 60m2 and are large enough to provide students with good studying conditions.

Gibbs and the Recetur were welcomed by Principal of the Cité Scolaire Robert Weinum Borel, Principal of Soualiga Collège Frigo, and the President of Caisse Territoriale des Œuvres Scolaires (CTOS) Pascale Alix-Laborde. They stopped briefly at the school restaurant before visiting the new classes and took the time to interact with the students and their teachers, praising the hard work done in recent months.

To provide students with optimal learning conditions in the coming years, the Collectivité has decided to build a new College for 900 students by 2021. In the meantime, the Collectivité and the Rectorat have approved 14 additional prefabricated classrooms for the upcoming school year. This system will make it possible to accommodate students from Soualiga Collège. The six classrooms constructed will then be made available to high school students at Lycée in Cité Scolaire.

As for the four prefabricated units that had been made available by the Gendarmerie, they will be moved near the sports complex and will serve as changing rooms for students and storage space for school equipment.