Home Local News Comedians bring down the house for Laugh ’Til Belly Burst 15 |... 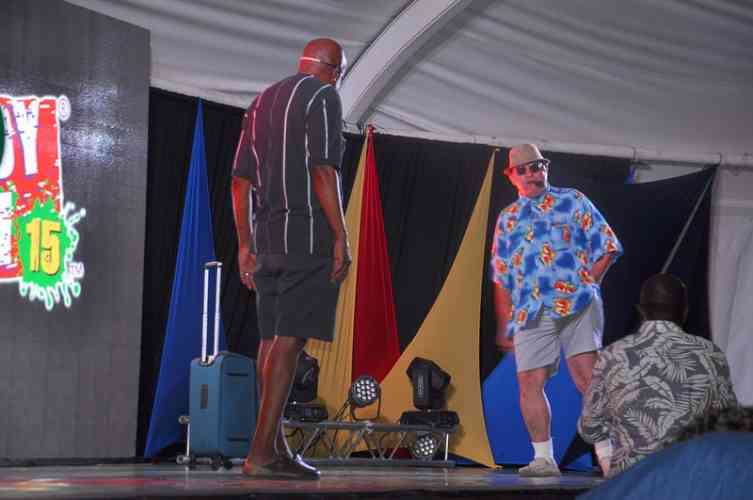 Comedians Errol and George from Trinidad and Tobago.

COLE BAY–The line-up of comedians who performed for Laugh ’Til Belly Burst (LTBB) 15 under the tent at Princess Port de Plaisance Resort and Casino on Friday and Saturday evenings brought the house down with their jokes about everything from relationships and raising kids to politics.

American actor and comedian Tommy Davidson, from comedy show “In Living Color,” did not disappoint. Davidson, who performed just before the last act on Saturday evening, delivered punch line after punch line and had the audience in stitches for his entire routine.

During his performance Davidson humorously compared the disciplining measures between blacks and whites and how both races react to hearing gunshots, amongst many other issues. He also showed off his singing skills and gave an insight into dance moves that have gone out of style. His Latin impressions and of former US President Barack Obama were on point.

London-Jamaican comedian Kane Brown ended the show with some bone-tickling jokes covering a range of issues from relationships and why he does not want any more kids to Winair flights. Brown was very funny in his act.

Comedian Lemon from Jamaica was the first performer. He spoke about why he would not sign up his children for a game of cricket, sang, and touched on issues such as children and relationships.

Duo Errol and George from Trinidad and Tobago performed an hilarious skit as a local encouraging a tourist to stay in Dutch Quarter rather than in his Belair Beach Hotel and trying to scam the tourist, who eventually gave him his credit card and its PIN number to withdraw US $10,000 worth of fees, which had the audience in stitches.

Rachel Price from TT was raw and uncensored in her act focusing heavily on sex and relationships. In advising women to let men who stress them out go, she said she does not understand women, as they are the only species who throw out garbage and run and take it back.

In touching on politics, she said all Caribbean countries suffer from bad governance and all politicians suffer from corruption. She said St. Maarten politician Theo Heyliger should not have been locked up for bribery, because bribery is in the genetic code of Caribbean politicians.

Local radio personality Gary “Gee Money” Euton, who served as emcee, also dished out a number of jokes in between acts.

Apart from a brief interruption of power and sound during one of the performances during the Saturday evening show, which this newspaper attended, the show was largely incident-free and, judging from the reaction of the large audience, was a very good show.

On both nights of the show, lucky guests won door prizes which included jewellery from Zhaveri and gifts from Hot Look and another establishment.

The grand LTBB Raffle was drawn during the Saturday night show, with the first prize being a round-trip ticket for two to New York and a six-night stay at The Embassy Suites in Manhattan; the second prize a round-trip ticket for two to any Winair destination (Antigua, Aruba, Bonaire Curacao, Dominica, Guadeloupe, Haiti, Nevis, Saba, Puerto Rico, Santo Domingo, St. Barths, St. Eustatius, St Kitts, St. Maarten or Tortola); the third prize a three-night stay at Sonesta Maho Beach Resort and Casino; and the fourth prize a Samsung Galaxy S9 mobile phone.