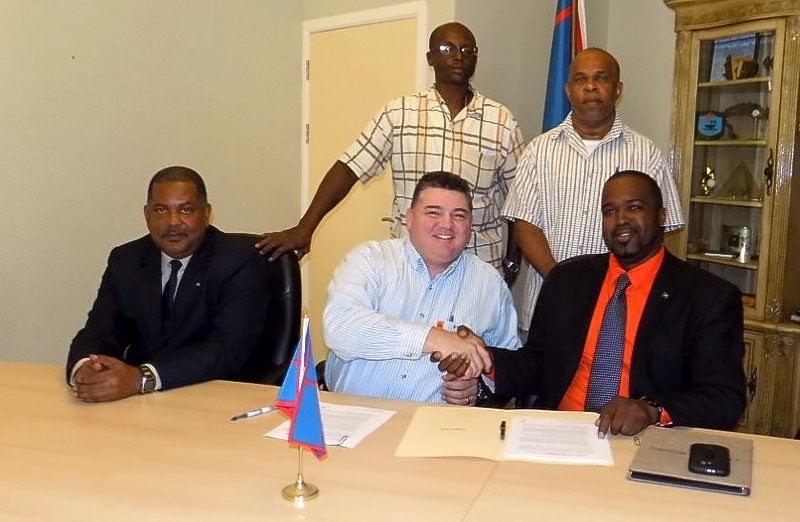 ST. EUSTATIUS–“The Dutch Government has a negative agenda for St. Eustatius, continues to act in bad faith, and does not have the best interests of the people of Statia at heart,” Commissioner Charles Woodley said in response to a press release issued Friday by Dutch Government Representative in the Caribbean Netherlands Gilbert Isabella.

In the contested release, Isabella informed that the Ministry of Home Affairs and Kingdom Relations BZK had requested that the State Attorney of the Netherlands provide an advice on the agreement signed Friday between the Executive Council and Statia Terminals operator NuStar N.V.

“It is in the interest of the development and future of the Public Entity St. Eustatius and its population to reach good contractual agreements with NuStar. All efforts are directed towards reaching accurate and legally correct agreements in order to reach clarity for all parties about the content and scope of the new arrangements.

“This is a 10-year agreement that not only touches St. Eustatius and NuStar, but also areas of several ministries. Therefore, the Ministry of Home Affairs and Kingdom Relations has asked the State Attorney to look at the agreement and provide an advice,” it was stated.

Woodley said he had sought and received advice from the Island Government’s legal counsel. “This is the same company that was appointed by the Dutch government to assist St. Eustatius with drafting the Harbour Ordinance and who also represented the Dutch Government in their court case against NuStar. This advice basically points out that the actions taken by the Minister are both incorrect and unlawful,” he said.

It is incorrect because the agreement does not impact any of the Dutch ministries, as the press release claims, Woodley stated. He said the agreement merely concerns harbour tariffs, “nothing more and nothing less.”

The actions by the Ministry are also “unlawful because the Kingdom Representative in essence vetoed a legitimate act by the Statia Government, which lies within its decentralised competence.

“The reason given in the press release was that a preventative legal test of the act of signing the agreement was needed. However, according to the [Law on the Public Entities Bonaire, Statia and Saba – Ed.] WolBES, the Ministry of BZK does not have that right or authority, and neither does any other Ministry,” Woodley said.

“The Dutch Government needs to realise that the law, including WolBES, applies to everybody equally. As such, the Kingdom Representative should not misinterpret and misrepresent the laws which his own Government put in place. If he feels that his interference was lawful, he should clearly indicate based on which legislation this took place, as is customary, which he has not done thus far.

“He also should not force the Island Governor, who was willing to sign the NuStar agreement on behalf of Government, to break those same laws by instructing the Governor not to sign it.”

According to Commissioner Woodley, the release issued by Isabella “confirms” that the Dutch Government has a “negative agenda” where Statia is concerned.

“Government will continue to defend the best interests of Statia and its citizens, including good corporate citizens like NuStar, and build a prosperous future for all together,” he said.