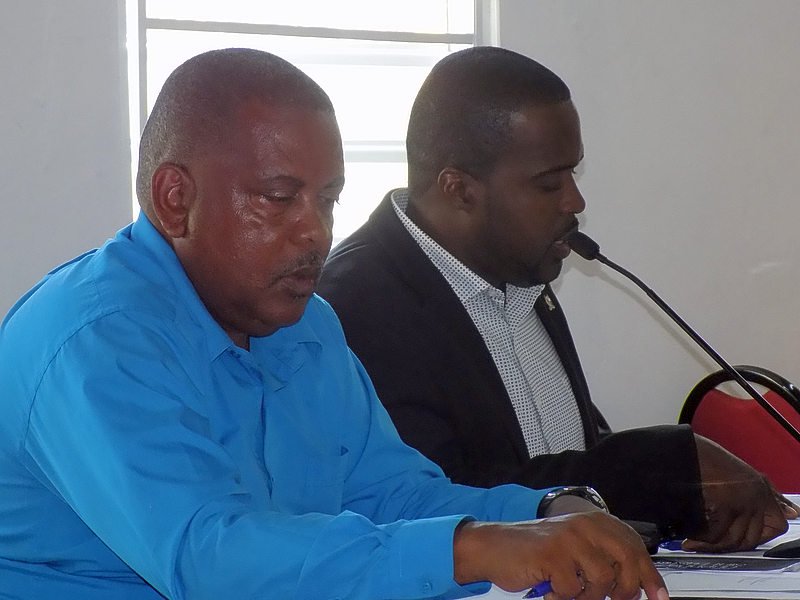 ST. EUSTATIUS–Commissioners of St. Eustatius Derrick Simmons and Charles Woodley both communicated that they have distanced themselves from Island Councilman Clyde van Putten statements made during a conference in Curaçao in which he incited violence against the Dutch military.

“In connection with the event that took place on October 9, 2017, involving a speech made by Councilman C. van Putten held on Curaçao, we would like to distance ourselves from the words used that were not appropriate and caused an uproar in specific media circles.”

Island Councilman for Progressive Labour Party (PLP) Van Putten, who considers himself the leader of Statia’s ruling coalition, took to the airwaves on Tuesday to offer his apologies regarding his statement made during a congress of the organisation Korsou Fuerte i Outonomo (KFO) in Curaçao in which he threatened to “kill and burn” Dutch militaries if they come to his island.

“It was in no way my intention to incite or to make any threats with regard to killing any Dutch military personnel or any Dutch individuals for that matter,” Van Putten stated.

The statement did not only cause an uproar in the media, as the Commissioners stated. Caretaker Minister of Home Affairs and Kingdom Relations Ronald Plasterk on Friday filed an official complaint with the Prosecutor’s Office on Curaçao against Van Putten for threatening.

Minister Plasterk said it was totally “unacceptable” that Van Putten used such language during the congress.

The Attorney General has commissioned an investigation. After receipt of a report it will be decided whether the PLP-foreman will be formally charged or not, spokesman for the Prosecutor’s Office Norman Serphos said Thursday.

Van Putten’s remarks did not sit well with local politicians on the island either. Opposition Democratic Party (DP) of Statia called for an extraordinary Island Council meeting to debate Van Putten’s statements.

Coalition partner and independent Island Councilmember Reuben Merkman said he hoped that Van Putten would find it in his heart to offer his apologies, and United People’s Coalition (UPC) send a letter to the editor in The Daily Herald in which UPC leader Reginald Zaandam refuted the PLP foreman’s remarks.

The statements also led to an online petition, launched by Lenaria Brown, an 8-year-old student at Gwendoline van Putten School. Some 200 persons signed the petition, in which they “strongly condemn and distance” themselves from the statements made by the PLP leader.

“How many streets did Mr. Van Putten clean, how many people did he help? Shameful indeed, he does not represent any person I have met on Statia. He needs to be removed from office. No elected politician should be allowed to speak that way,” one of the signatories of the online petition commented.

The petition is open until October 31, after which the petition and signatures will be presented to Acting Island Governor Julian Woodley. He promised to hand over the petition to the Dutch Government and to representatives of the Dutch military.