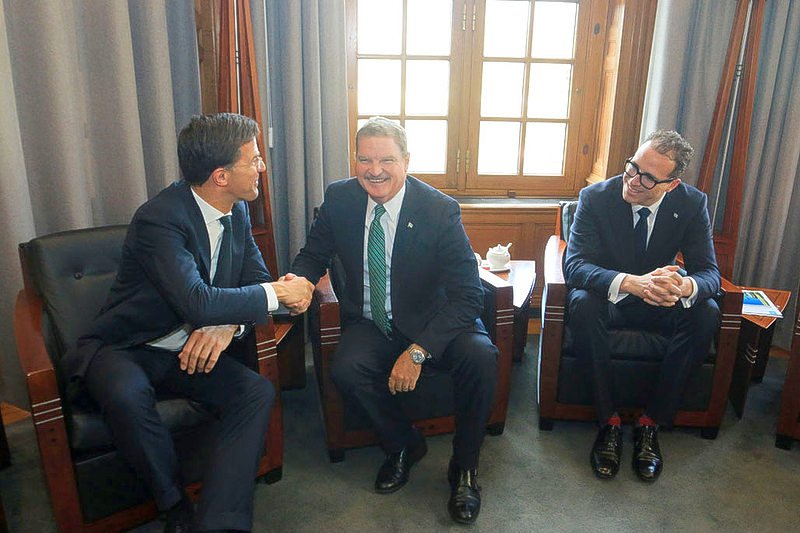 “Now that the elections are over, I see possibilities for a great enthusiasm to revamp the relations within the Kingdom,” said Pechtold, whose party is part of the exploratory talks to form a new government, together with VVD and CDA. He said it was very necessary to refurbish the relations, which have not always been good these past years.

According to Pecthold, D66 not only dedicated ample attention to the Kingdom in its party programme of the 2017 elections, but has also shown in the past that the relations within the Kingdom were valuable. He said the new Dutch Government should grasp the “opportunities for cooperation.”

Prime Minister Rutte told Eman in the meeting that he was sure Kingdom relations would be part of the negotiations for a new government. “Eman and I are of the opinion that we have to intensify the relations, that we have to discuss how to work together on dealing with the climate changes, the transition to clean energy and how together we can use and cooperate the innovative forces,” Rutte said in an Aruba Government Information Service press release.

The relations within the Kingdom are important due to the unique shared history of the partners, said Rutte. “History brought us together and the relations brought unqiue opportuntities,” he said. He mentioned the hub function of the islands between Latin America and Europe which in his opinion has “enormous possibilities for both sides.”

CDA leader Buma said after his meeting with Eman, which was also attended by Aruba Minister Plenipotentiary Juan David Yrausquin, that it was important for the new government to have a focused view on the future of the Kingdom.

He said that even though parties were still in an exploratory phase to form a new Dutch Government, for him it was obvious that parties had to be clear on how they want to see the Kingdom.

“The outgoing government often gave me the feeling that the Kingdom was more of an obligation. Rutte has even said that all it would take was a phone call to ditch the islands. I certainly don’t share that view. We have a shared past and we also have a future together. It is the responsibility of us all to look out for a better future for the citizens in the Kingdom. I am more than willing to contribute to that,” said Buma.

Eman visited the Netherlands this week for talks with various members of government, politicians, businesspeople and institutions, as well as students and others of Aruban descent. He also met with Rotterdam Mayor Ahmed Aboutaleb.

Eman will attend the Aruba Day festivities in Rijswijk this Sunday.