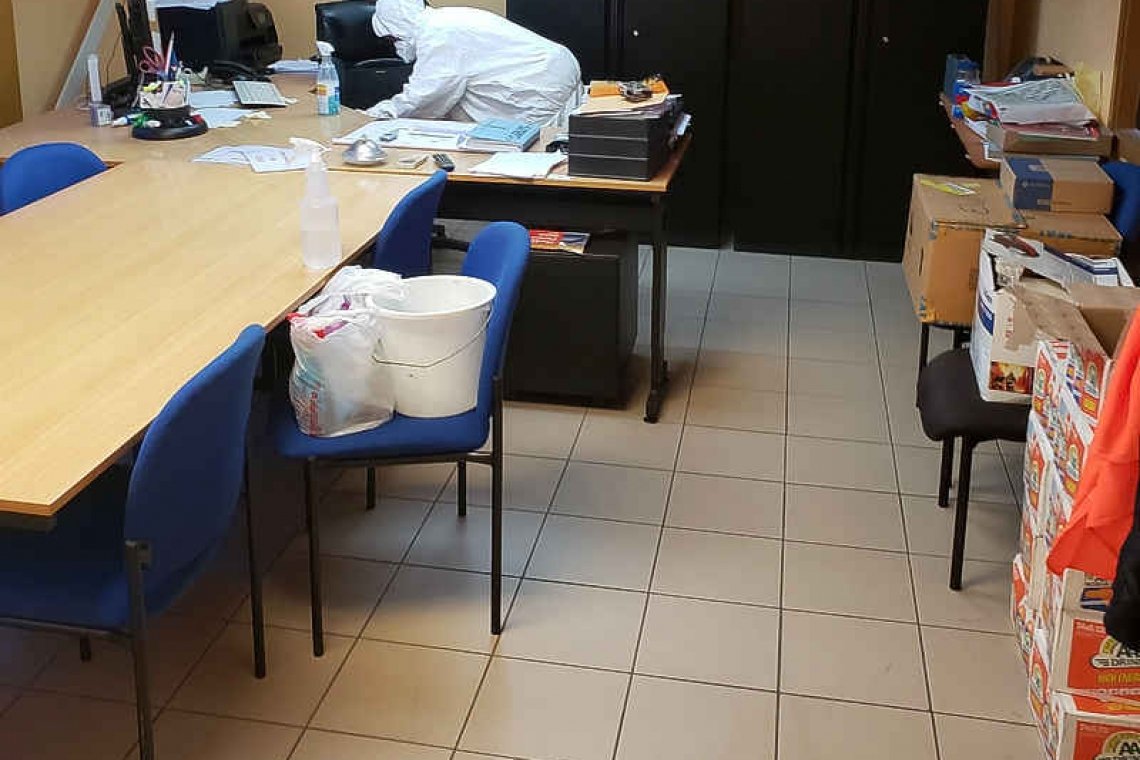 A cleaner sanitising an office at the fire station in St. Eustatius.

ST. EUSTATIUS–Fire chief Andre Bennett arrived at the fire station at 9:00am Monday wearing a facemask after he was dropped off by a family member. Fire personnel on shift became upset when they saw their chief entering the building and they subsequently left the premises.  The chief and his spouse had travelled to St. Maarten last week for a brief vacation and returned to St. Eustatius on Friday morning, July 16. The public entity St. Eustatius has classified St. Maarten as a medium-risk country and anyone arriving from St. Maarten has to go into self-quarantine provided separate adequate sanitary facilities are available; otherwise, they would have to go into quarantine.

Fire personnel contacted their shift leader, the acting fire chief and their union representative about the situation with their chief apparently breaking self-quarantine regulations. The St. Eustatius Health Department and the police were also called and members of both organisations went to the fire station to ensure that Bennett left the premises.

The management company that cleans the building was contacted and the areas in the fire station visited by the chief were sanitised. The workers wore personal protective equipment while cleaning.

Acting Government Commissioner Alida Francis stated that Bennett is in quarantine for 14 days after returning to Statia from St. Maarten on Friday. He was granted permission to leave the premises under strict precautionary measures strictly for essential work which requires his presence. It was further agreed that he would limit his outdoor activities as much as possible and would use his own vehicle, wear a face mask and strictly maintain social distance, to which Bennett “complied fully,” said Francis.

“Regretfully this decision was not communicated with the workers. His showing up at work this [Monday – Ed.] morning to collect some necessary items and to participate in a video conference sparked concern among colleagues. Not to worry the public unnecessarily, it has since been decided that he will follow all work-related activities from his home,” she said.

“The public entity of St. Eustatius is preparing a strategic plan on how to work within the ‘new normal.’ COVID is around and will be for a while.  “In the coming weeks a large group of essential workers are expected to travel from medium- and high-risk countries. We are already planning and preparing on how essential workers from medium-risk countries can function without placing the community at risk.  “We are committed to keeping the community of St. Eustatius safe. We will keep our residents informed and will communicate the plan of approach in due time. By the time this plan takes effect we hope to have testing capacity in place on the island.”

All for 1 one union president Charles Woodley said he had contacted Director of Social Affairs Carol Jack-Roosberg, who told him that Bennett is an essential worker and as long as he adheres to the guidelines for essential workers he could work. Jack-Roosberg said she would call the fire department and check whether Bennett was adhering to the guidelines, according to Woodley.