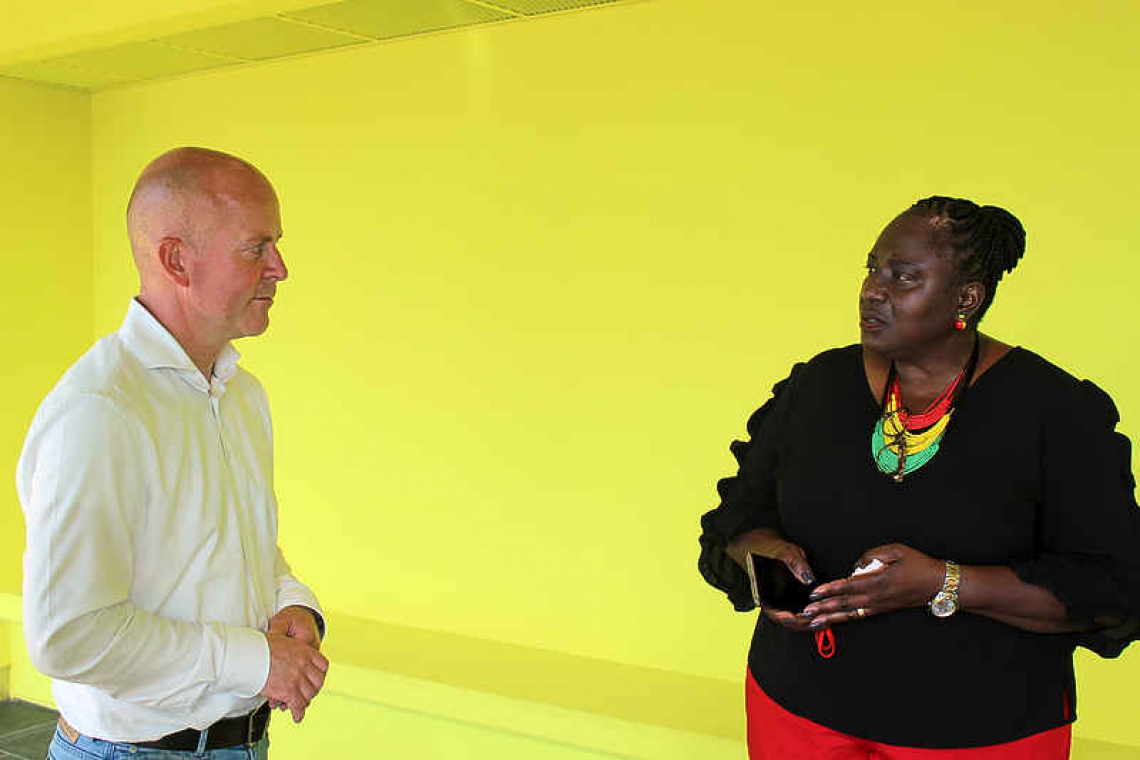 From left: State Secretary Raymond Knops speaking with Deputy Government Commissioner Alida Francis in the departure hall of the newly built airport terminal.
THE HAGUE–While it is understandable that the St. Eustatius Island Council wants to speed up the process to restore competences of government, it is not possible to comply with the local politicians’ wishes at this stage.

Caretaker State Secretary of Home Affairs and Kingdom Relations Raymond Knops implied this in the seventh progress report about the government intervention in St. Eustatius, which has been in effect since early 2018. He sent the report to the Second Chamber of the Dutch Parliament on Monday. Today, Wednesday, the Second Chamber’s Permanent Committee for Kingdom Relations will have a debate with the state secretary about St. Eustatius.

From left: State Secretary Raymond Knops greeting one of his friends on Statia, Max Fortin with elbow bump.

According to Knops, these proposals were “not in line” with the current law that aims to restore the Statia government competency in time, a law that was approved with broad support in the First and the Second Chambers in February 2018. “I have indicated in the Island Council that I completely back this law. Possible amendments to this law are not up to the Island Council, but to the Second Chamber,” he stated.

In a separate letter to the Statia Island Council, of which he sent a copy to the Dutch Parliament, the state secretary noted that his goal and that of the (acting) government commissioner were similar. “We both strive to restore democracy as fast as possible. But it has to be on the basis of the law that describes the steps towards sustainable recovery.”

Giving content to the criteria of the route-timetable with results and planning is a joint task of the (acting) government commissioner and the Island Council. As things look now, the intention is to go from phase one to two on December 31, 2022, stated Knops.

In Knops’ opinion, the current recovery was still fragile and the restoration results need to be sustainable. He noted that it was no easy mission to shift the long-term neglect into a situation where future local government officials can adequately carry out the tasks on their own and where there are no longer large backlogs. “Speed is not the objective. The objective is a St. Eustatius to which everyone contributes and from which everyone ultimately profits,” he stated.

“Caution is required. The starting point was a situation in which both the government and social-economic tasks were neglected and there was a large backlog that needed to be cleared. That is not completed as yet and keeping the current recovery speed is a real challenge for the public entity St. Eustatius, especially with the COVID-19 pandemic which hampers the economic development and connectivity.”

Knops reiterated that the islands were connected with each other and with the world in a limited way through air and maritime traffic. “If St. Eustatius again opens its borders for tourists and other visitors, the current low vaccination rate of the population is a health risk that needs to be diminished.”

In his progress report, the state secretary also touched on various subjects, including infrastructure, social domain, connectivity and economic coronavirus crisis assistance. Since the Dutch intervention, new roads measuring 4.1 kilometres in length have been constructed for a total value of 7.2 million euros. “This has made the infrastructure safer and better.”

The Dutch government also promised cheaper and faster Internet, a better and more reliable drinking water network and the combating of erosion at the Fort Oranje cliffs. This has all been achieved, noted Knops. He said that during his visit, he saw with his own eyes that “again many results were accomplished” and that “meaningful steps” were taken to improve the living circumstances of people on the island. “Slowly, but surely a foundation is being laid for the future.”

The Dutch government has been financially assisting Statia’s private sector and government during the pandemic. In 2020 and in the first quarter of 2021, about 780,000 euros was paid to entrepreneurs to cover fixed cost and another 2.8 million euros to help support the companies’ wage cost.

The compensation was paid to 150 entrepreneurs and 350 employees. The three main sectors were the hospitality sector, the culture, sports and recreation sector, and the rental and other business services sector.

The public entity St. Eustatius received 2.3 million euros in 2020 to compensate the loss of tax revenues. Another 1.9 million euros was allocated for the first two quarters of 2021. “This financial assistance was direly needed to support the people and the government in this period when the borders were closed.”

Knops stated that he was currently consulting with the Ministry of Public Health, Welfare and Sport VWS to see how the island, despite the low vaccination rate of less than 50 per cent, can be reopened in a responsible way so the support packages can be reduced.