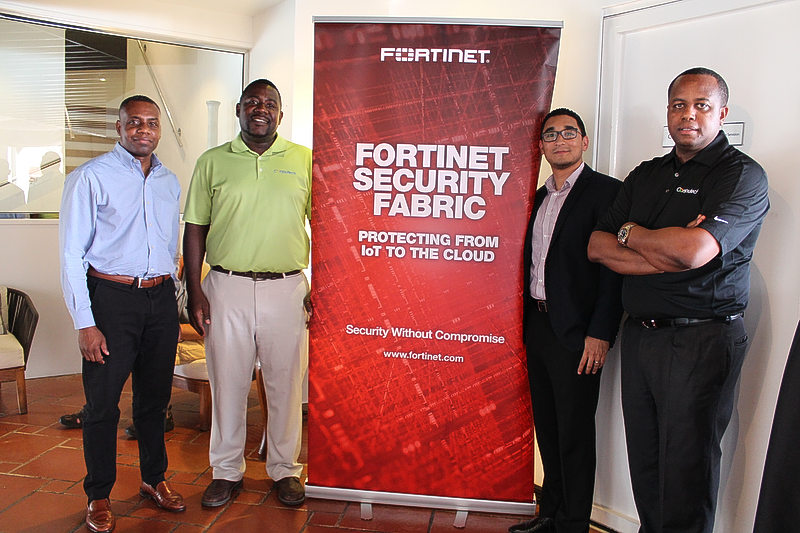 PHILIPSBURG–French side-based company Computech, a strategic Internet Technology (IT) company offering technology services and solutions and outsourcing on both sides of the island, has entered into a partnership agreement with Fortinet, a leading global player offering network security to companies to fight today’s ever-growing threat of cyber-crime and hacking attacks.

Fortinet executives held a conference on how to protect valuable data and information in Holland House Hotel on Tuesday for invited companies and business leaders. Present were representatives of Sint Maarten’s Parliament, GEBE, Harbour Group of Companies, NAGICO, SZV, TelEm, Antek ITC solutions and other companies.

The seminar was given by Fortinet’s Territory Business Manager for Bermuda and the Caribbean Alberto Leo and Regional Systems Engineer for the English-speaking Caribbean Emmanuel Oscar.

Computech co-owner Jean Arnell explained in his introduction that Computech had chosen Fortinet as a partner after Microsoft discontinued its primary Firewall product two years ago.

“Fortinet is the only company that provides end-to-end (device to network) threat management, data security, application security and network security. It’s not just anti-virus on your desktop,” said Arnell. “They have the products for ultimate security, such as specific security processors and more.

“Security now has to go much deeper in terms of inspecting network traffic within your organisation. For a long time we have been protected from the outside, but today most of the threats are occurring from the inside. This is all about prevention and about business continuity and how we mitigate and minimise the consequences of these threats when they arise.”

Arnell said Fortinet infrastructure will be installed for both island governments and many other companies on the island.

Alberto Leo said cyber-crime is one of the top four economic crimes in a US one-trillion-dollar industry that has become a “business.” He gave an example of how huge amounts of money can be made by hacking into stock market information.

“Hackers can get the information about a company merger before it happens. This means if you buy stock before the merger, say US $10,000, you know you are going to get rich. Imagine if you knew then how big Amazon would become today. This is the sort of information hackers are trying to get.”

He said hospitals with all their patient records and data were particularly vulnerable, and even more serious financial institutions such as banks potentially can lose information about customers and how much money they have. He cited an example of millions of dollars having to be paid out by Target when its credit card information was breached because it did not have sufficient protection.

“Target did not even know they were being attacked. It was months later that they realised but it was too late,” he said.

In another example a cosmetic surgery business was hacked, all the sensitive photos of patients were released, and hackers demanded 300 bitcoins (equivalent of $800,000).

“What Fortinet has is a holistic approach to protecting the network. Security has to be in the network. Hackers are getting more advanced and sophisticated. We have seen that with the wannacry hack and ransomeware,” Leo continued. “Ransomeware was also a worm looking at other computers at the same time to encrypt information. Cameras and other devices in your network, hackers use them to attack other companies.

“The Apple watch is not permitted in the British Parliament because you don’t know if the watch is infected or if it is ‘listening’ to information in Parliament. The challenge is how to put security on devices like the Apple watch and other devices that were not supposed to be protected. That’s why we believe security has to be in the network.

“Why not have a system where we can inspect and manage everything? That is what we do. We protect your internet connection, the different end points, the process you are doing with your credit cards, and much more.”

One of Fortinet’s security systems is Fortiguard, which has the intelligence to inspect all traffic on the network 24/7. It can discover breaking threats and updates the system accordingly.

Fortinet, formed in 2000, also ships the most security devices worldwide according to Leo.

Arnell noted there were a few companies in St. Martin that were affected by the recent wannacry and ransomeware hacks, but because of security concerns little information on numbers was released by the victims.

“It’s important to understand the various steps that need to be taken to secure your network. Customers need to back up their data in a location where it can be restored rapidly,” he advised. “There are various business continuity measures that have to be taken to mitigate the risk of information being compromised. You may or may not lose data, but you will experience a downturn and that has a cost if your business has to shut its doors.

“The reason for the conference is also to prompt a regional conversation on securing data in the face of this new warfare.”