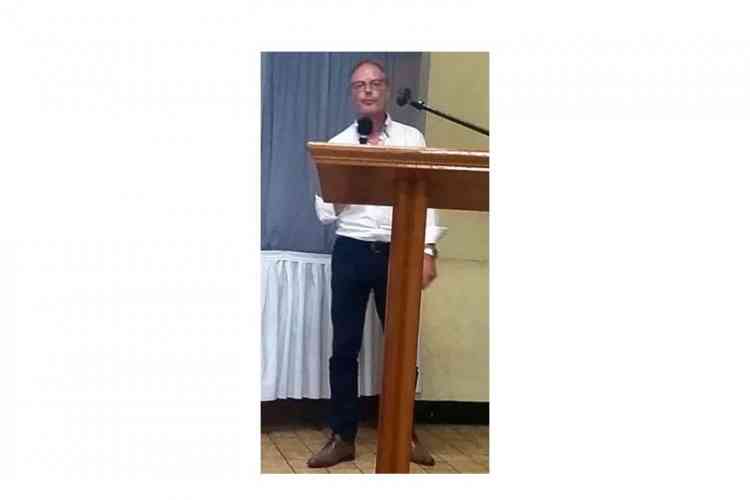 Aviation project manager at the Ministry of Infrastructure and Water Management Ton Fransen speaking at the town-hall meeting about the renovation of F.D. Roosevelt Airport in St. Eustatius.

Under the airport masterplan of April 2012, the new terminal and tower will be made according to international safety requirements.

The terminal will also be made ready for the future of aviation. The first phase of the airport renovation was finalized in 2016, during which the entire lighting system was changed, the runway renovated and fencing replaced.

The airport is designed to receive ATR-42 and ATR 72 twin-engine turboprop aircraft.

The air traffic control tower will be situated for the best view of both ends of the runway. The small, but efficient three-level tower will have a 360-degree view and, like the airport terminal, will be provided with a secondary power supply by a generator.

They new terminal building will be constructed to withstand hurricane-force winds. Therefore, the number of open areas at the airport will be limited.

Similar to St. Maarten’s Airport, Statia’s terminal will also have a class-four designation, as last year’s hurricanes taught that class-two and -three designations were not enough, aviation project manager at the Ministry of Infrastructure and Water Management Ton Fransen said. He is also overseeing the current renovation of Juancho E. Yrausquin Airport on Saba.

The new terminal is estimated to be roughly four times the size of the current terminal and will include check-in, waiting, security and baggage areas, a bar and four toilets for men and women. The design team will be looking into redesigning the outside waiting area.

The building is going to be one story instead of two floors, as the cost for having a two-story building would be more expensive based on hurricane-proof reinforcement.

The design for the security area will be based on international regulations. Some areas may be closed off to allow climatization at a later date, if needed.

Based on budget constraints and limits in size the airport will not have any additional commercial facilities. The old fire station could be renovated to house commercial property, but that decision has not been made as yet. Fuelling facilities may also be included, depending on the availability of funds.

The airport tax may be increased, but that is a decision the local government has to make. Fransen created a budget for maintenance for the airport to be self-sufficient.

Government Commissioner Marcolino Franco stated that during his recent visit to Statia, State Secretary of Home Affairs and Kingdom Relations Raymond Knops stated that the free allowance would not be raised but that US $1.2 million a year extra would be provided for the budget for maintenance. The amount has already been granted and approved.

There are no plans to privatize the airport, only to improve it at this time. Whether or not parking will be included in the project will depend on the bidding process and whether there will be extra money available.

During the town-hall meeting the suggestion was made to introduce paid parking at the airport to generate revenues and to limit the number of cars left at the airport when persons travel abroad.