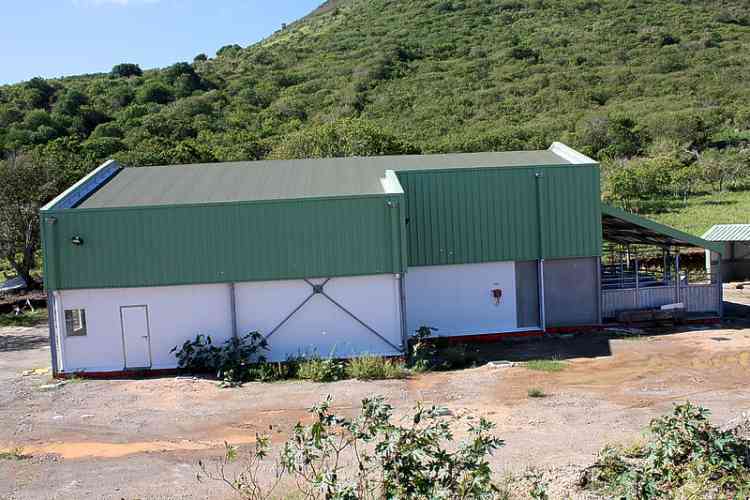 MARIGOT — Board member of Association pour le Dévéloppement de L’Elevage et la Promotion des Produits Agricole Locaux (ADEPPAL) and former Agriculture Project Manager for the Chamber of Commerce Julien Gumbs, says the Collectivité is dragging its feet over addressing a serious situation at the abattoir in Mill Run, Grand Case, over unpaid work done by companies, equipment that still needs to be repaired, and questions over the shortly-to-end management contract.

The 1-million-euro facility was inaugurated in early June 2015 and is managed by Société d’Exploitation des Abattoir (SEABAT) which won the public bid opened by the Collectivité in May 2014.

According to Gumbs, companies that did emergency repairs to the building in the aftermath of Hurricane Irma have still not been paid. These repairs were authorised at the time by the Préfecture’s crisis management centre, not by the Collectivité.

“The Collectivité didn’t receive any invoices which is true, because quotations were not approved and there were no purchase orders,” he explained. “Without the purchase order the companies could not make up an invoice, but the companies went ahead and did the work anyway.

“But things have got worse. The chill rooms are not functioning and there are issues with the electricity, air compressor and water heater. Contractors that we want to fix these problems won’t come back because they have not been paid. Nevertheless, we are doing our best to give service. It seems the Collectivité is not showing any direction, vision, interest or responsibility as the owner of the facility.”

Gumbs said he and ADEPPAL members did get to have a meeting two weeks ago with Vice-President Yawo Nuyiadzi, Elie Touze and Territorial Councillor Sophia Carti-Codrington, but it had not gone well.

“We felt deceived. After having requested meetings and explaining our situation since January, the Collectivité was asking us what the problem was. It was like having no meeting at all. So, we are back to square one again with no solution. They’re telling us they are going to do a study on the abattoir. We are asking ourselves how can the Collectivité show such little interest in a sector that everyone wanted to see develop and let it go down the drain?”

SEABAT’s current management contract expires at the end of July 2018, after already being extended by one year, presenting another concern over who will manage the abattoir from that point on. If no solution is found quickly, the abattoir must close its doors.
Asked to respond to Gumbs’ complaints, Vice-President Yawo Nuyiadzi disagreed with his comments, insisting the Collectivité is acting on the abattoir.

“We have met with ADEPPAL and we are in the process of restructuring the abattoir in consultation with the State, because there are special issues to deal with over health and hygiene,” he said. “It’s very important technicians do the work correctly to conform to regulations. Everyone is in a hurry, but it needs to be done right.

“We are putting a budget in place for the financing. There were many public buildings damaged, people to be paid, but they have to wait. My point is we have not forgotten the abattoir or abandoned them. The technicians are working on it.”
On the question of the management contract, he said normally speaking a bid should be launched again but it may also be possible to renew or extend the contract with the manager, Emmanuel Gimenez Richardson.

He added he was unaware of the reasons companies that did emergency work to the abattoir could not get paid. Newly-appointed City Manager Magguy Gumbs suggested maybe it is the Préfecture’s responsibility to pay them since that was where the authorisation to carry out the work was made.