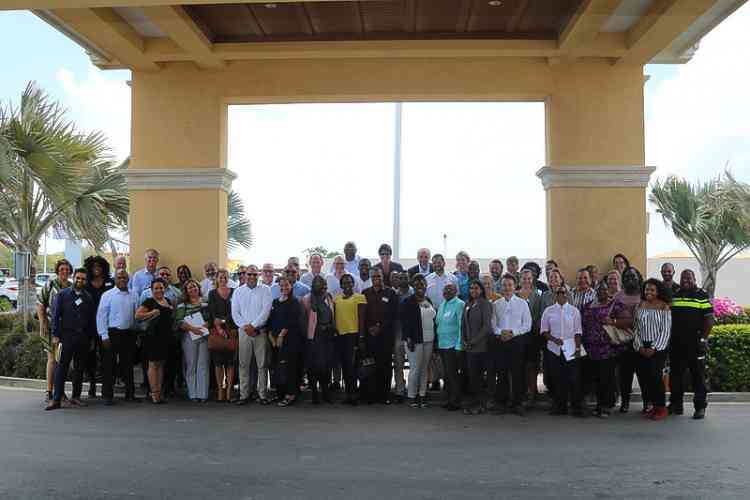 Participants in the three-day conference on human trafficking and smuggling.

BONAIRE–The Dutch Ministry of Justice and Security has been organising a three-day conference in Bonaire on human trafficking and smuggling. The conference started Tuesday and is intended for experts from various law enforcement agencies in the Caribbean Netherlands, Curaçao, St. Maarten, Aruba and the Netherlands. The aim of the conference is to further promote better cooperation to firmly tackle preventing and combatting human trafficking and human smuggling.

Day one of the conference was focussed on the transfer of knowledge for the construction and maintenance of the register, for which a covenant had been signed in the Caribbean Netherlands in June 2017. The register is now ready and can be put into use. Reports and signs of human trafficking and smuggling of human beings can be included in the register.

Day two of the conference was aimed at exchanging experiences about the prevention and tackling of human trafficking and human smuggling in and between the countries of the Kingdom. In 2015, the Netherlands, Aruba, Curaçao and St. Maarten signed a Memorandum of Understanding (MoU) for this.

On Thursday, the last day of the conference, experts from the United States will discuss the detection of human trafficking and human smuggling. Special attention will be paid to financial investigations and the approach of victims in the investigation process. The terms of agreement for cooperation between the Kingdom and the United States (US) are mentioned in a MoU from 2016.

Trafficking and smuggling in human beings are serious crimes and must be dealt with firmly, according to the Ministry of Justice. Human trafficking is the exploitation of people under duress and is also referred to internationally as a modern form of slavery.

The main sectors where exploitation takes place are the catering industry, construction, prostitution and domestic aides. Trafficking in human beings is the illegal transfer of people to another country.