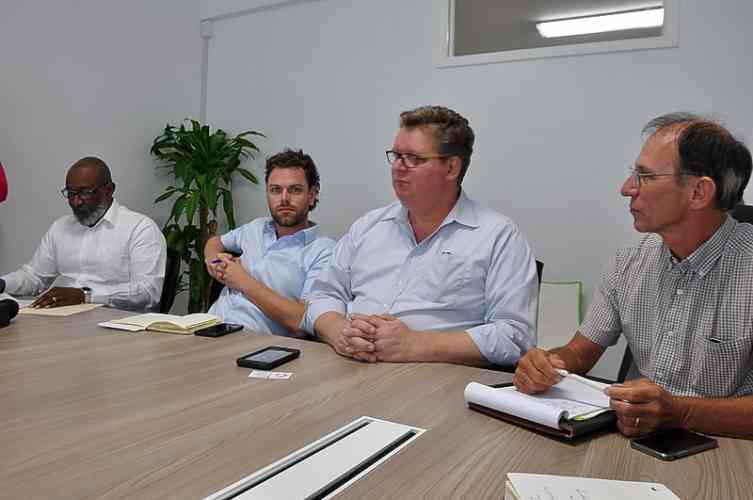 PHILIPSBURG–National Recovery Programme Bureau (NRPB) Director Claret Connor provided an update on the status of the various Hurricane Irma recovery projects financed by the trust fund and officially opened the Bureau’s new office on Walter Nisbeth Road during a press conference on Friday.

The Interim Recovery Committee has transitioned into the NRPB, which now has a physical office at Walter Nisbeth Road #57 in the old Labour Department building next to Carl and Son’s.

Connor said a grant agreement for US $55,200,000 for Emergency Recovery Project 1 had been signed on July 11, 2018. There are four components to this project, with more than 50 different activities.

Component 1 is the emergency measures for the recovery of disaster first responders and for preparedness facilities. Under this component activities such as repairs and the procurement of disaster preparedness equipment for the Police Force and the Ambulance and Fire Departments are being executed. Currently ongoing are the repairs to the police headquarters in Philipsburg and substation in Simpson Bay.

Connor was recently given a tour to check on the progress of these projects.

The repairs to different existing shelter locations are also to be executed. The tenders for these works closed a few days ago, Connor told reporters.

Also, under this component is the procurement of special-purpose vehicles, including the addition of new fire trucks and ambulances as well as support vehicles for critical ministry functions such as the Ministry of Public Housing, Spatial Planning, Environment and Infrastructure VROMI Inspection Department, Meteorological Office and Tax Department.

The second component includes the restoration and increasing the resilience of water and electricity infrastructure via utilities company GEBE.

“After the signing of a negotiated subsidiary agreement which designates the conditions under which the activities will be executed, various forms of assistance will be given to GEBE. This assistance will include review and strengthening of NV GEBE’s business plan,” Connor told reporters.

The third component includes the repair of houses and public buildings, and reconstruction.

“The first priority on housing repairs has been support to the St. Maarten Housing Development Foundation (SMHDF), in which 117 units are in the process of being repaired as we speak. Last week, I was able to visit the housing complex and see first-hand some of the completed repairs and interact with the residents of the units.

“The second priority on housing repairs is the roof repair programme for homeowners that was originally established by the Ministry of VROMI after the hurricane. Since my appointment as Director, this programme is now being coordinated by the Bureau,” Connor said.

“Though we have encountered some unforeseen challenges, when all is said and done the expectation is that hundreds of houses will have been repaired. A separate press announcement on the status and next steps of this crucial activity will be provided within short.”

He said another priority under this component is the repairs of public buildings, especially schools. The VROMI Ministry and the Ministry of Education are in the process of repairing a number of schools through insurance funds.

“As NRPB, we are currently preparing the tender for the technical assessment that needs to be done before hiring the contractor for the works to schools that cannot be repaired through insurance funds. Noteworthy is that all works contracts awarded thus far have been awarded to local companies,” Connor said.

The fourth component is institutional support for reconstruction. Connor said “the massive task” of overseeing the recovery process while still continuing with day-to-day running of the country is a task that Government cannot absorb in terms of capacity and time. As a result, institutional support in the form of the Recovery Bureau has been budgeted as part of the Trust Fund activities, including funds for the building and staff that will be needed to oversee the entire recovery process.

Under the guidance of the Interim Recovery Committee and now under the Bureau itself, efforts to establish a national ordinance, find appropriate office space and fully staff the Bureau have been ongoing. To date the Bureau has advertised numerous vacancies for staff and short-term consultants.

“We are also in the process of designing and developing our logo, corporate identity and website, and these will be used as tools to further inform the general public of the different projects being implemented. Our website is live and functional in a limited capacity until the full site is launched. The temporary page currently hosts the details of our open tenders and vacancies,” Connor said.

A grant agreement of $25 million was signed in December 2018 for the Emergency Debris Management Project, which aims to manage debris from the hurricane and from reconstruction activities. This includes clearance, collection and processing of remaining hurricane debris and salvaging the vessels that remain in Simpson Bay Lagoon and Mullet Pond.

A number of activities have already been undertaken in collaboration with the World Bank that include environmental studies and testing to determine the best approach to fight the fires, advices to the Ministry of VROMI on strengthening the day-to-day management of the site, procurement of dedicated equipment for better fire control on the sites and support to government for the establishment of a resettlement action plan for a limited number of families living very close to firefighting activities.

“Next week on-island there will be a team of World Bank specialists that will meet with our teams here in St. Maarten along with various local stakeholders to advance on many of the required preparations that have already taken place.”

One of the components under this project is ship salvaging.

“Just this week an official announcement was made by the Ministry of VROMI informing owners of shipwrecked vessels located in the Mullet Pond and Simpson Bay Lagoon that they have six weeks to claim their vessels or it will be considered abandoned and will then become property of the Government.”

“While we await the end of the six-week period, the terms of reference and procedure manual for this project are currently being developed. Once the vessels have been removed from the water, transportation of the wreckage to a decommissioning yard will happen.

He also spoke about the Emergency Income Support Training Programme, for which a grant agreement for $22.5 million was signed in August 2018. This programme has been and continues to be open to persons who are unemployed or underemployed.

New classes in the hospitality and culinary sections began during the first week of March with close to 170 persons. This is the second class of students since the inception of the programme. Interested individuals can still enrol and are encouraged to visit the Labour Office or e-mail

labor-affairs@sintmaartegov.org for more information and registration.

Also financed under the Trust Fund is a comprehensive social registry system, based in the Ministry of Health, Labour and Social Affairs VSA, to simplify registration processes.

At the moment, if a client goes in and registers for social assistance for example, they have to fill in forms and take in supporting documentation. If a client requires other services or assistance, another registration process takes place.

With this new social registry system, this process would be more efficient and clients will only need to be registered one time with their basic information. This information can be stored and only has to be complemented with new information or updated if need be.

With the completion of this project, the expectation is that the entire intake process will be much more customer-friendly and efficient, Connor said.

He also spoke about the Airport Terminal Reconstruction Project, whereby Princess Juliana International Airport (PJIA) will receive $100 million – $50 million as a grant from the World Bank Trust Fund to the Government of St. Maarten, which will be loaned to PJIA under favourable conditions, and $50 million as a loan through the European Investment Bank (EIB).

The Recovery Bureau has been coordinating the preparation of this project and facilitating talks between the airport, World Bank, the European Investment Bank, the Government of the Netherlands and bondholders over the past month. The parties are in the final stage of working out all the necessary legal and financial documentation.

“I look forward to presenting more detailed information on the project to the people and businesses of St. Maarten upon completion of the necessary paperwork,” Connor said.