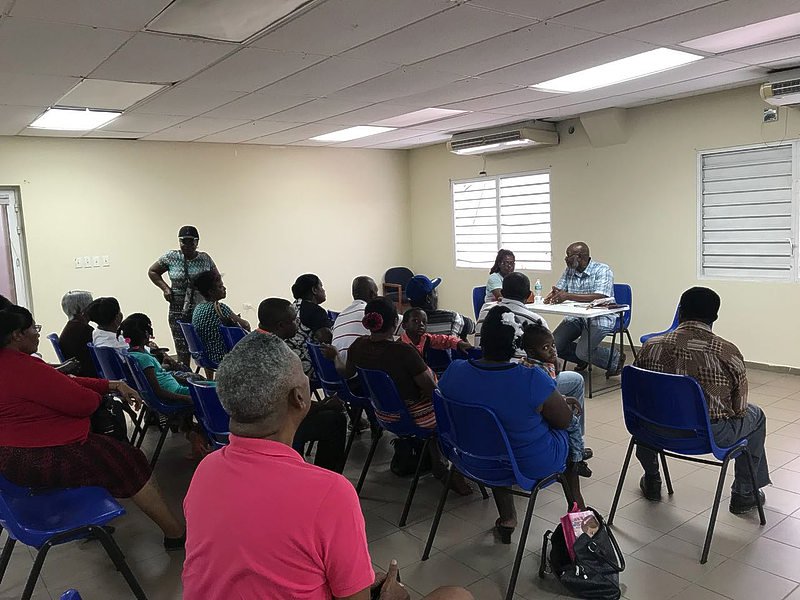 PHILIPSBURG–Member of Parliament (MP) Claret Connor has told affected Philipsburg Marketplace vendors he will seek answers about the demolition of their stalls following Hurricanes Irma and Maria and demand from Tourism and Economic Affairs Minister Mellissa Arrindell-Doncher her new plan for the stall locations.

Connor (United People’s (UP) party), a former tourism and economic minister, met with vendors led by representative Ingrid Trellis on Sunday afternoon to hear the struggling they now face with loss of their livelihood coming swiftly after the devastation of the hurricanes.

“The vendors felt disrespected by the abrupt decision to demolish the stalls that they occupied without prior notice or consultation. …  Vendors wanted to know if it was too much for the Minister to inform the permit holders about her intentions prior to taking the actions,” Conner said in a press statement issued on Monday.

Connor assured the vendors their grievances will be addressed with the Minister in writing and clarity will be sought about maintenance of the marketplace and stalls as well as proof that the structures were indeed hazardous for passers-by and vendors.

He also plans to request from the Minister new plans for the area with technical and architectural drawings for the reconstructed marketplace and related documents on her decisions.

“Improvements to enhance our tourism product are always welcomed. … Government also has a moral obligation to communicate and consult with its partners, even if they are street vendors,” Connor said. “A decision that would affect the livelihood of so many should not be taken in such a manner. This will only add additional distress to the many families that depend on these micro-businesses for a living.”

Trellis informed him that she had met with the market officer and the contractor who built the market more than a decade ago to assess the hurricane-related damage. Less than 10 of the 50 stalls were found to need repairs.

The contractor indicated repairs to the damaged stalls would take about one week, giving ample time for any further sprucing up of the area and prior to the target date the start of the tourist season on November 11 – the date for the return of the cruise ships. Vendors were then surprised by the start of demolition of all stalls on October 9.

According to Connor, what was even more disturbing for vendors was that no one knew of the demolition decision. Attempts to contact the Ministry of Economic Affairs were eventually fruitful, but no information was given.

Arrindell-Doncher said in press statements following the start of demolition that the marketplace was unsafe for passers-by and users. The area has also become an “eyesore” in the heart of Philipsburg, she said.