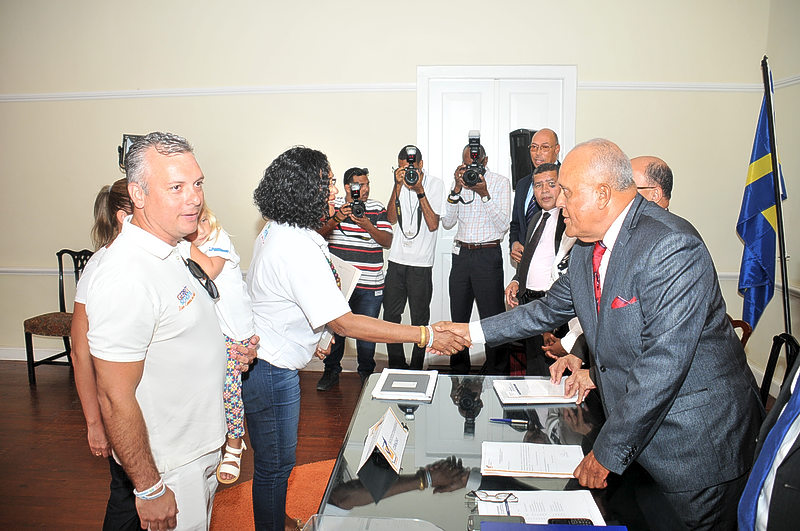 WILLEMSTAD–Despite the fact that she recently hit and injured MAN-parliamentarian Giselle McWilliam inside the assembly hall, MFK-fraction member Jacinta Constancia is back on her party’s candidate list for the early election of April 28 at number 3. Right above her is PAS-leader Charles Cooper, whose party is not participating this time but joined forces with MFK.

Immediately following the incident Constancia had indicated she would resign, however, after her release pending trial for assault and threatening McWilliam’s fraction colleague Elsa Rozendal, MFK held a press conference to say Constancia would remain in Parliament. Some still expected her to retire from active politics once her term in office ends, but that is apparently not the case.

Schotte did indicate that submitting the list is merely a backup plan, because the “new majority” wants the national decree with which the outgoing Koeiman Cabinet dissolved the legislature and called snap elections to be annulled by the Kingdom Government. If not they will take it to the international level, he warned.

The same sentiments were echoed by “Korsou di Nos Tur” (KdNT) of Amparo dos Santos, according to number two on the party’s list Menki Rojer. “We know that the procedures did not go according to law, but we have a dual policy. On the one hand we present our candidate list and on the other hand we will do all that we can to stop the elections,” he said.

Rojer added that his party never stopped campaigning. Even the week right after the elections in October last year they continued going to the neighbourhoods talking to the people and helping them with their needs.

“The election is not a surprise for us. However, the way it was done, we are completely against.”

Independent (former PAR) parliamentarian Eduard Braam has been added to the KdNT list.