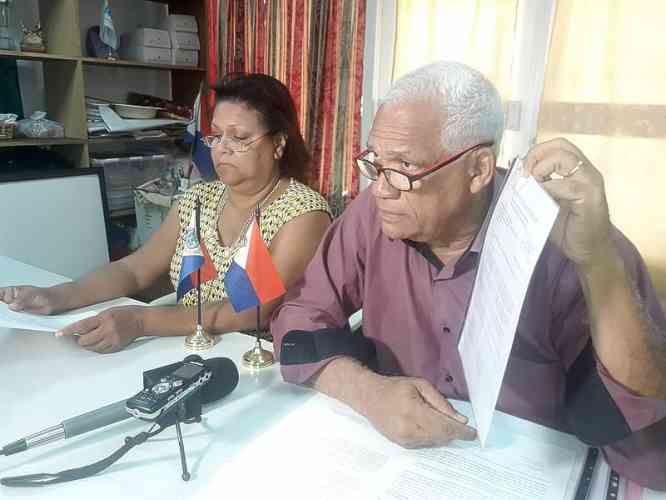 PHILIPSBURG–The St. Maarten Consumers Coalition and Anti-Poverty Platform is concerned about the protection level of the funds of the people of St. Maarten in local banks, at Social and Health Insurances SZV and in government’s coffers and will be requesting a series of meetings on the matter.

“We as consumers are very concerned about the protection level of our funds and our money. We will ask for a meeting with management of SZV to get more clarity about what happened (in the case of the recent phishing scam), and we will also ask for a meeting with the Bankers Association and the Minister of Finance,” Platform and Coalition representative Claire Elshot said at a press conference on Tuesday.

“Why with the Bankers Association? Because concerned consumers have told us about how they went to pin at ATM machines and there was no money on their account. After protesting the bank guaranteed them their money, but fact was that money had disappeared from their account. We want to meet with the Minister of Finance because last year there was an attack on the servers of government which also affected the Receiver’s Office. How can we be protected from claims of the Receiver’s Office when the administration of the Receiver’s Office is compromised? We will demand guarantees and will seek advice for an independent oversight to guarantee our consumer rights,” Elshot said.

Elshot alluded to the recent statements by SZV, which said it had been targeted by a seemingly international phishing scam. SZV said the scam took place via e-mail correspondence, where the scammers posed as a company insider that requested and approved financial transactions. The scam was of such a sophisticated nature that protocol was not breached, and this led to no initial suspicion of the action, SZV had said in a statement.

SZV has since increased its Information Communications Technology (ICT) security measures as well as its banking protocols, which will now include additional manual checks. The scam was reported to the respective authorities, an official police report has been filed as well and the FBI and other international agencies are being contacted for assistance. SZV said it is seeking to retrieve the money transferred as part of the scam. The amount of funds lost was not mentioned.