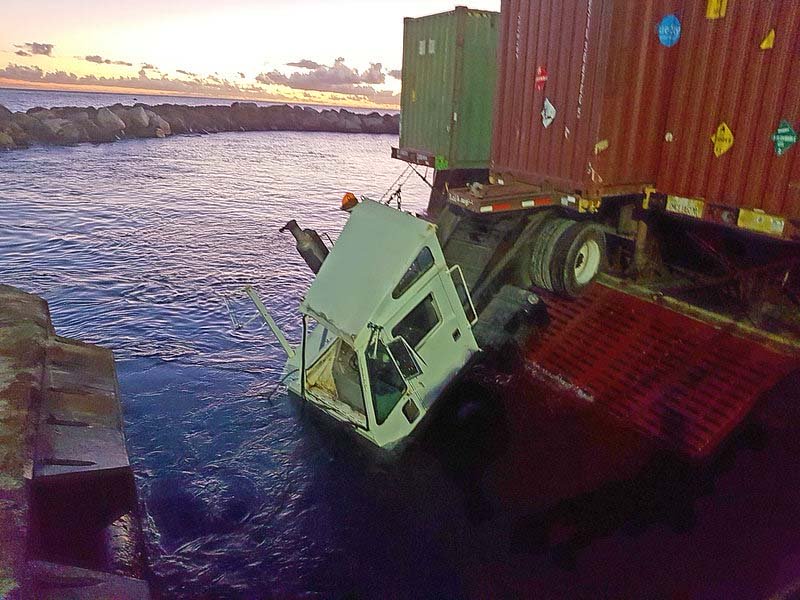 The truck was left in a precarious situation as its flatbed with a container was still on board MV Midnight Tide at Charles A. Woodley Pier.

ST. EUSTATIUS–A truck was severely damaged in an accident Wednesday evening at Charles A. Woodley pier after a line broke off MV Midnight Tide. The truck driver was not severely injured in the accident which occurred between 8:30 and 9:00. The truck’s cabin sustained a lot of damage.

The container vessel’s agent said the seas had not been rough at the time of the incident. But as it was surging, the ship’s captain had made the suggestion to tie the ship with another line. However, at that moment the rope with which the vessel was secured to the pier came lose, and the container ship started moving away from the ramp on which the truck was parked to load a container.

The truck driver managed to jump out of the truck when the vehicle started to topple into the water. Persons present jumped in to assist and quickly everything was brought back under control. The truck was hoisted onto the pier with the assistance of a crane.

The Midnight Tide was able to leave after the incident. No one sustained any serious injuries. Only the truck driver was seen walking with a limp which was caused by him having to jumping out of the cabin.

A large crowd gathered on the waterfront to see the incident unfold before their eyes.