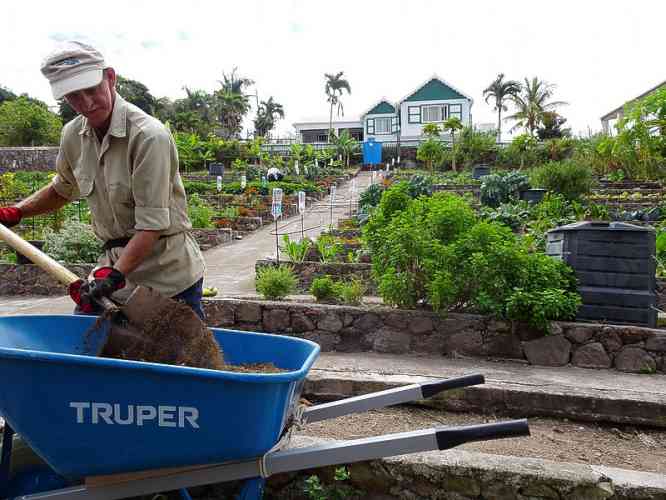 The public entity Saba continues to invest in agriculture, not only to provide a source of healthy food and to offer employment, but also to keep this sector as a part of local culture. In photo: The garden at The Level.

SABA–The public entity Saba continues to invest in agriculture, not only to provide a source of healthy food and to offer employment, but also to keep this sector as a part of local culture.

The farm at Zion’s Hill and the garden at The Level have been successful in growing produce. The hydroponics/greenhouse farm at Rendez-Vous will give agriculture a further boost once it opens in 2020.

Agriculture played an important part in the daily life of Sabans in the past. Although it will not be as prominent as it once was, Commissioner of Agriculture, Social and Labour Affairs Rolando Wilson and Agricultural Department head Randall Johnson aim to keep agriculture going and expand it where possible.

“We carried almost 100 pounds of green banana in one day this week and 75 pounds of tania,” said Junior.

“The weight of the produce, carrying it up the hill is challenging,” said Aneuris.

Farming is a way of life for the three Hassells. “I grew up with cattle and farming. Our grandparents and great-grandparents were farming all the way up the hill to Sandy Cruz. I have some bulls myself,” said Orlando.

“We grew up with it. I also do my own farming at home. Keep myself occupied,” said Junior.

Growing local produce is a win-win situation. “It is much healthier than the stuff that is imported, and it provides work. Plus, it keeps you busy and out of trouble,” said Orlando.

Aneuris cited several reasons why it is also important for young people to farm. “You can provide for your family. It is healthy and it is good for the community. Every island should grow its own food.”

Fertilisers are used as little as possible. Instead, cow- and goat-manure are used to enrich the soil. Natural neem oil serves to keep insects at bay.

The produce is sold through Big Rock and Unique supermarkets and at the weekly market outside Breadline Plaza. The leftover leaves and bush go to the animals. “We leave nothing to go to waste,” said Randall Johnson.

Irrigation takes place with a system of pipes that carries down water using the elevation from a large cistern on the side of the road next to the building.

So far, the farm has been able to manage the current drought. An issue is that goats sometimes jump over the fence. The farm, built on leased land, has been in existence for three years. “It took us a while to start up. We started on the upper part and expanded down the hill,” said Johnson.

The garden at The Level serves as a social workplace. It is part of Saba Reach Foundation and is subsidised by the public entity Saba.

“We grow as much produce as we can, all organic, while at the same time providing a safe working place for persons with a distance to the labour market. This is our main goal,” said assistant garden manager Maarten Plante-Van der Horn.

Eight clients are in the programme: three full-timers and five part-timers. Care coordinator Lonneke Schut provides support to the clients.

Alexander Hassell (61) is the garden’s most senior worker. He has been there since January 2007. “I really like working here. I am here every morning. My main work is composting, which is my specialty,” he said.

The garden mainly produces vegetables, herbs and some fruits. It was originally built by Cubans as an organic garden.

“We use no pesticides and only organic fertilisers. Finding organic solutions is a challenge, but Sam Frederick, our garden manager, has a lot of knowledge and many ideas. Companion planting is a good example. The concept of companion planting is to place the plants in such a way that they strengthen each other,” said Plante.

An irrigation system is being constructed. The water comes from cisterns, including rainwater that is collected from the road. “The drought is a challenge,” said Plante.

Large, long compost bins are used to create new, rich soil mixed with goat-manure from goat pens in the neighbourhood. The bins’ sides will be raised in the near future through a DOET Oranjefonds project to increase the effectiveness of the composting system.

The garden does home and office deliveries for a small contribution once per week. The garden’s products are also sold at the Wednesday morning “market” in Windwardside. The products are very popular because they are fresh, locally grown, great tasting and organic. At the same time, people support a good cause.

Commissioner Rolando Wilson explained that a third agricultural project, the hydroponics farm and greenhouses at Rendez-Vous, should be ready in 2020. The plan has been laid out and the project will go on bid shortly.

The land is being prepared, which is no easy task because the land needs to be flattened and the area is located on a slope with many large rocks. “But it is good soil, ideal for farming,” said Wilson.

Initially, three greenhouses will be constructed, one of which will be for hydroponic farming. Mainly lettuce and herbs will be grown in the hydroponics greenhouse. The other two greenhouses will have soil on the floor to grow vegetables such as tomatoes and peppers. “This is a more controlled way of farming in an enclosed area,” said Johnson.

The land has been purchased with funds from the Dutch Ministry of Agriculture, Nature and Food Quality.

Wilson said the public entity Saba remains committed to investments in agriculture. “The benefits of agriculture are multiple and that is why it is important to keep investing. It means healthy, fresh food for our people. It provides employment; honest earnings that make people feel proud.”

The commissioner said he was impressed with the produce despite the long drought. “That is thanks to the hard work and creativity of the farmers.”

Government and the Agricultural Department have put a lot of effort into stimulating farming, said Johnson. “We assist local farmers with water, water storage, seeds and fencing, but we also help cattle owners who keep goats, bulls, chickens and pigs with food and water.”

He said getting a constant supply of animal food was a challenge. Having a dry storage area would help to solve the issue of storing sufficient animal food.