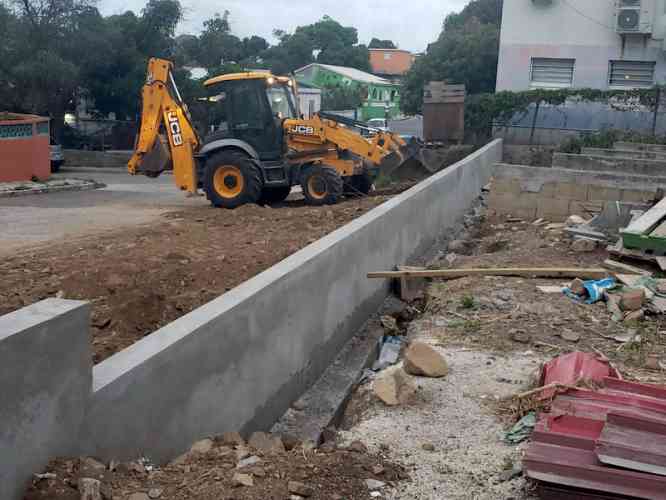 Heavy equipment being operated at SMVTS on Tuesday.

SOUTH REWARD–Work on the construction of the four new classrooms at St. Maarten Vocational Training School (SMVTS) has resumed.

Some preparatory work began on Tuesday and the contractor is expected to fully resume work today, Wednesday. It is understood that an arrangement was made for the payment of outstanding monies due to the contractor for invoices that had been submitted.

The contractor had stopped work recently because of non-payment. Minister of Education Wycliffe Smith had said recently that invoices for government contractors take eight weeks for due processing. The SMVTS contractor had been submitted two invoices. The first invoice was submitted “some time ago with errors” and was re-submitted seven weeks ago during the Carnival period, after making corrections. The second invoice was handed in four weeks ago.

Smith had said at the time that he was mindful of the need for timely compensation for contractors, as this impacts their ability to pay salaries to their employees and to meet their personal and company financial obligations.

The Ministry of Public Housing, Spatial Planning, Environment and Infrastructure VROMI handles construction projects on behalf of the Government along with the Ministry of Education, Culture, Youth and Sport due to the required technical expertise and supervision.

Smith had said also that he is keen on the realisation of the construction project in a timely manner.