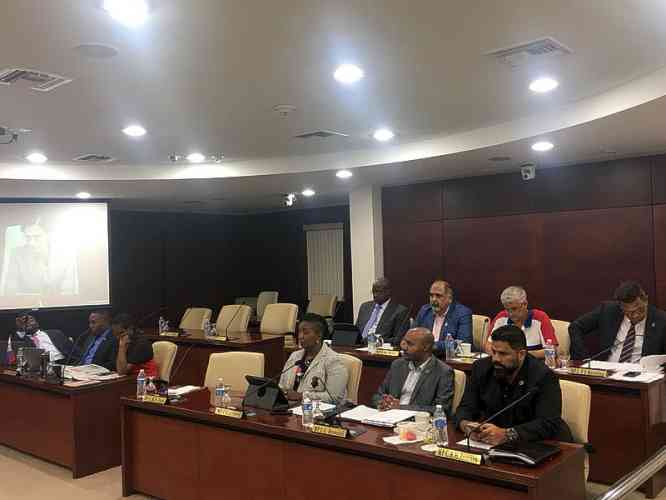 PHILIPSBURG–Members of Parliament (MPs) passed on Friday what was labelled by some MPs as a “redundant,” “contradictory” and “reactive” motion calling on the Education Minister to draft and present a safe school plan to Parliament within 60 days and report on its progress within 30 days.

The motion, which was passed by five votes for and four votes against, caught some MPs by surprise, some of whom pointed out contradictions in the motion and indicated that the majority of resolutions proposed are already in place or are being worked on.

The motion, presented by St. Maarten Christian Party (SMCP) MP Claude “Chaco” Peterson, also seemed to suggest that social media were responsible for the rise in school fights, which was condemned as inaccurate by some MPs.

The consideration of the motion stated that:  “Violence and aggression undermine the social fabric of any nation; that more and more it is being demonstrated that individuals seek solutions by means of aggressive acts; that social media amplify what is taking place and the resulting sensationalism surrounding any altercation only adds fire to fury; fights around schools by students and others are perceived to be on the increase, possibly because of the same social media process; and a process of re-education and tolerance is slow, but hopefully beneficial in future.”

Also mentioned in the consideration of the motion is the workshop held by St. Maarten Student Support Services Division (SSSD) on November 7 and it summarised the responses from that session to be the following: “Schools should have more control and apply their rules; students should not be allowed to leave school premises when they should be in class; students who video and live-stream school fights should be held responsible by law; parents should limit children’s time on social media; kids must be forewarned about the consequences of their actions; government must urgently build a youth detention centre; radio personalities on radio should be reminded of the unbelievably huge responsibility they have with their  ability to influence young minds; building more juvenile jails does not contribute to the sustainability of country; make parents responsible for the actions of their minor children and remind parents of their responsibilities.”

The motion resolved to call on Education Minister Wycliffe Smith to use the information coming out of SSSD and other sessions to draft a “safe school plan” in close cooperation with stakeholders, including school boards, teachers, parents, students, law enforcement and other community leaders. The plan should include “elements” of parental support, positive peer pressure, parental responsibility, school safety plans, school transportation policy, a rehabilitation programme catered to the youth, and public awareness.

While coalition MPs present (Sarah Wescot-Williams, Sidharth “Cookie” Bijlani, Dr. Luc Mercelina, Chanel Brownbill and Peterson) voted for the motion, those from the opposition (Silveria Jacobs, Christophe Emmanuel, Ardwell Irion and Rolando Brison) were against it.

Jacobs said that, being a former Education Minister, she is aware that a safe school plan is already in place. She said also that the SSSD sessions are planned ahead of time and the one held on November 7 had been planned prior to the fights that occurred just days before the session was held. She said also that SSSD has been actively seeking to get more stakeholders involved in its campaigns.

While she commended Peterson for the ideas behind his motion, she said it is clear that not enough research was done to know what is already in place. She said schools already have certain rules that prohibit the streaming of fights and there are repercussions for this. She also alluded to Miss Lalie Detention Centre in Cay Bay, which she said is a youth detention centre. This newspaper understands that this centre is currently closed.

“There are conflicting and contradictory conclusions that are brought forward [in the motion – Ed.],” she said, adding that of the eight considerations in the motion, five or six can be ticked off as being already in place or being worked on.

Emmanuel said he was “taken aback” to see intelligent persons in parliament, such as a medical doctor and businessman, support the content of the motion. “This is a reactive motion. It is not being proactive,” Emmanuel said, adding that he was still trying to figure out under which law students who live-stream fights, should be held responsible.

He said also that social media have been used by every MP to promote themselves and their ideas for political reasons and suggested that this platform be used to reach out to young people and to educate them with positivity.

Irion said the considerations and resolve of the motion do not relate to each other and the motivation for the motion is contradictory. He said limiting the speech of radio personalities is unconstitutional.

Wescot-Williams, who supported the motion, said she understood it and what it meant and for some MPs to make it seem as though the summary of the SSSD session of November 7, which was included in the motion, was coming from the MP who penned the motion, is hypocritical and misleading.