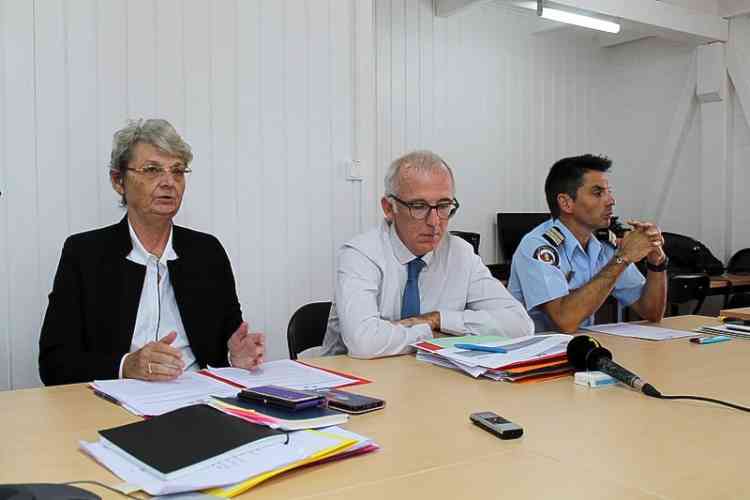 MARIGOT–Préfète Déléguée Anne Laubies outlined several objectives on which the Préfecture and Prosecution service will put emphasis in 2018, during a press conference on 2017 crime figures and delinquency situation on Thursday.

She said the first two priorities will be controlling illegal workers and illegal immigration. On the latter, she said working in cooperation with Dutch St. Maarten will be very important, as rules on the two sides are different.

“There are cases where you can enter the Dutch side quite legally, but on the other side you would be in an illegal situation in France,” she noted. “It’s a big problem. So, cooperation with the Dutch side is fundamentally important.”

Controls of construction sites and restaurants were cited as areas to detect the presence of illegal workers, but controls would also check for safety and security of workers and conformity to other rules and regulations.

Controls on competitive pricing to prevent fraud was also mentioned. On the question of what authorities are doing on the proliferation of firearms in the territory, Laubies said a special unit will be set up shortly to investigate how firearms get into the island, how they are circulated and who sells them, and ultimately to track down and confiscate them before they get into the wrong hands.

The last two occasions when a weapons amnesty was introduced, one of which was a joint amnesty with the Dutch side, were not successful.
The fifth objective mentioned was environmental controls and building (urbanism) controls.

On the delinquency situation, the Préfète noted that there has been less delinquency since the end of 2015, through 2016 and 2017, a trend that has been constant in all domains: security on the roads, violence, armed robberies, violence and burglaries. Violence against persons had dropped by 16 per cent.

“Delinquency in general has stabilised,” she said. “But looting in the 48 hours after Irma has had a repercussion on the delinquency figures for 2017, which otherwise would have been excellent. The rapid and effective response from law enforcement to the looting, theft of cars, receipt of stolen goods, etcetera, was very significant.”

Chief Prosecutor Samuel Finielz said 47 persons (ringleaders) had been arrested in the aftermath of Irma, nine of them minors, and 160 offences were recorded, 75 per cent of which were committed without violence. Two hundred cubic metres of confiscated stolen goods were either returned to their owners, given to the Red Cross or destroyed.
There were no homicides or armed robberies committed during Irma, and no home break-ins. The average age of looters was between 25 and 45 years. Finielz said many of the looters were women, of all nationalities.

The Préfète said the current very low crime rate and “sense of calmness” on the French side were undoubtedly due to the increase in law enforcement numbers and the dissuasive effect of the presence of Gendarmes in all areas of the territory.
Lt. Colonel Sébastien Manzoni confirmed the Gendarmerie has 270 Gendarmes presently on active duty in St. Martin and St. Barths, more than double the usual force.