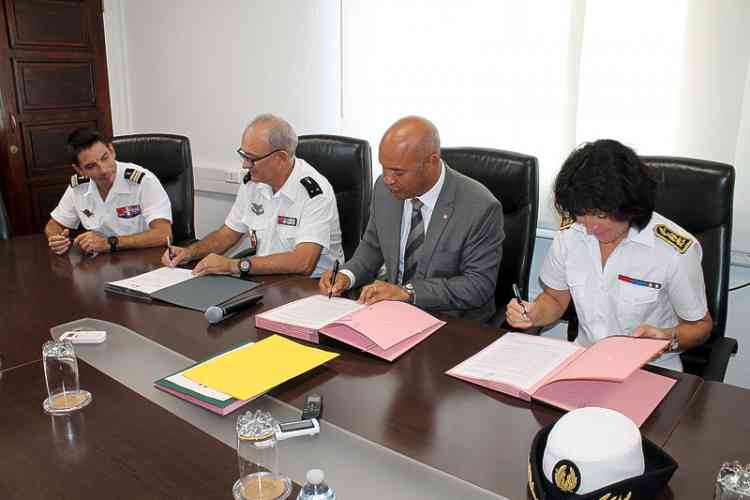 MARIGOT–A convention to reaffirm coordination and cooperation between the Gendarmerie and the Police Territorial was signed Friday between President Daniel Gibbs and Préfète Déléguée Sylvie Feucher in Hotel de la Collectivité.

Also present to give input was General Jean-Marc Descoux, Commandant of the Gendarmerie of Guadeloupe, Lt. Colonel Sébastien Manzoni, and Chief Prosecutor Samuel Finielz. The General was on the island to take part in a medal ceremony at the Gendarmerie headquarters in La Savane.

Gibbs explained the existing convention has been modified slightly for better organisation of interventions between Gendarmerie and Police Territorial with an added new aspect to the convention of sharing offices.

“Integration of the missions of Gendarmerie and Territorial Police for closer proximity to the population is something I have always been advocating,” he said. “In terms of preventative work, it’s more effective to share offices and we have begun that in French Quarter in the renovated sub-station and are working on the same concept for Sandy Ground. We are conscious that it is not just one part of the population that needs security, it’s the whole population.

“This ensures better coverage of the territory by law enforcement, so no sectors are left abandoned,” he added. “It’s also uniting our two security forces to work in the same direction with the same goals. The Gendarmerie has more turnover with postings lasting an average of three months, so having the Police working together with the Gendarmes is very useful for information sharing as the police know the territory so well, and in many cases know the inhabitants. You will see Police and Gendarmes together during controls.”

“We are also considering building a new Gendarmerie station close to Green Valley with accommodations for Gendarme families but that is still two or three years away,” he explained. “The idea is to divide the territory into two parts, the Marigot station serving the west side and the Grand Case Hope Estate station for the east side. This plan offers more proximity and better contact with the population.”

On the convention signing he noted Police and Gendarmes already work together in the field.

“We are sharing almost every day. The objective is to cooperate in the field on sharing patrols, sharing investigations, and to share information better.”