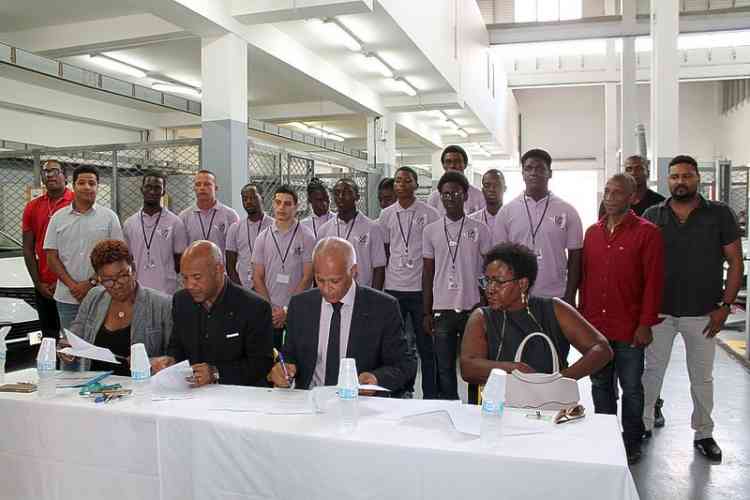 MARIGOT–Some 20 students of Professional Lycée studying in the car mechanics workshop will be able to obtain their motor vehicle driving licence before their studies and exams have been completed, thanks to a convention signed Monday between the Rectorat of Guadeloupe, the Collectivité, Lycée Professionelle des Iles du Nord (LPO) and Driving School Auto-École Chantal.

This initiative follows that of the boat licence for students in the nautical workshop made possible a year ago. The convention has been signed for four years.

“The idea is they come out with their Bac Professional and a driving licence so they are ready to drive vehicles if they have to in whatever job they might be doing,” explained Lycée Principal Janine Hamlet. “It’s a plus for them, it’s free of charge, it’s a help to the parents, and all we are asking is for them to be present and serious, because there is a lot of money involved.”

President Daniel Gibbs said obtaining the license early will definitely be an advantage for the students, as most often employers do require a driving licence, depending on the nature of the work.

The driving school which has the contract will take the students for lessons twice a week, on Wednesdays and Saturdays.

The convention was signed by Hamlet for the Lycée, President Gibbs for the Collectivité, Recteur Mostafa Fourar, and Chantal Monpierre for the driving school. Also present was third Vice-President in charge of Education Annick Pétrus, other education officials and teachers from the car mechanics workshop.

The Recteur and President Gibbs then went to Cité Scolaire in La Savane to see the long-awaited mobile classrooms which have only now, as of Monday, started to be used by the students.