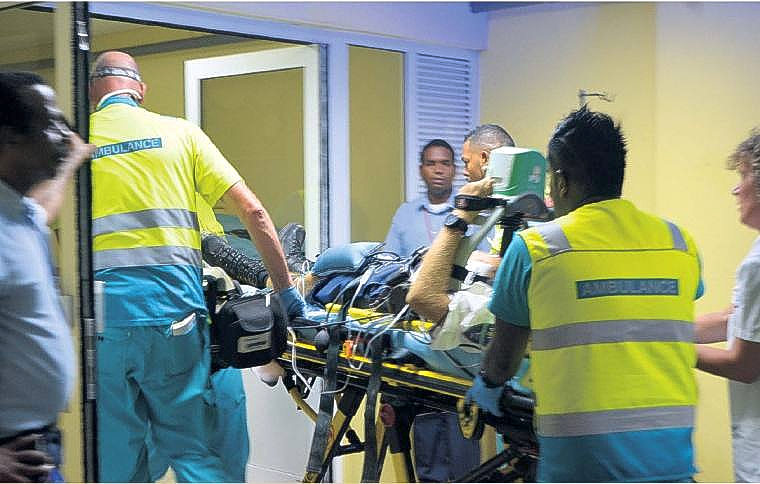 The fatally injured officer being put into an ambulance

BONAIRE–A Venezuelan man confessed to killing Dutch policeman Ferry Bakx after the officer caught him and others in the act of a robbery on Bonaire in August last year. The confession by 21-year-old Nitzael P.G. was made on Monday, the first day of a three-day trial against six Venezuelans and one man from Bonaire for Bakx’s shooting death. The Prosecutor’s Office on Tuesday requested 25 years imprisonment for the main suspect.   For locally-born Rachyt S., seen as the one who organised the armed robbery-gone-bad at the home of the Van Dijk family, the demand was 20 years.

Bakx and another officer responded to a call from a house on the western side of the island on August 17 last year. There they found a robbery in progress.

The robbers fled, the cops gave chase and it turned into a shootout. Bakx was hit and rushed to the hospital, but he died of his injuries.

Nitzael admitted that he had fired two shots at the victim to prevent the latter from shooting the suspect’s cousin William.

The defendant from Bonaire allegedly brought the six Venezuelans to the island to commit a number of robberies. The group had a number of weapons and two kilos of cocaine on them when they were caught. In addition to killing Bakx, the men are also suspected of human trafficking, illegal firearm possession and drug trafficking.

The Netherlands sent 20 detectives to the island to aid local authorities with the investigation into Bakx’s death.