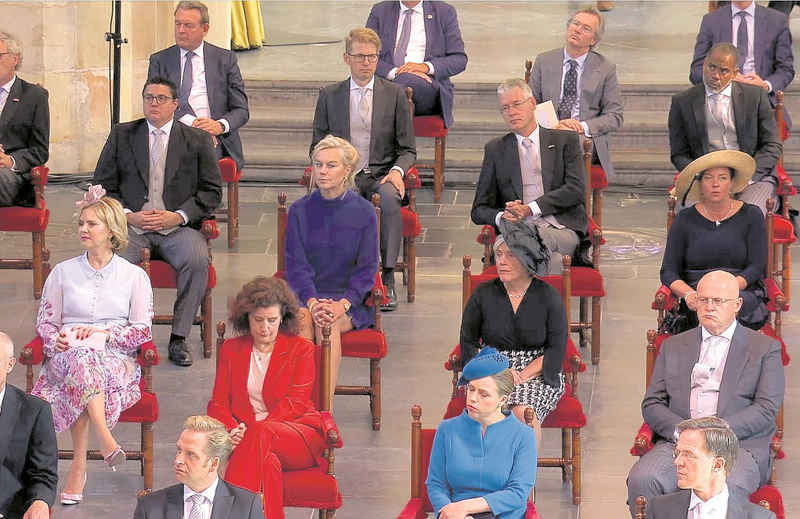 St. Maarten’s plenipotentiary Minister Rene Violenus can be seen at right in back row

THE HAGUE–“Corona affects us all – from Terschelling to Aruba, young and old,” said King Willem-Alexander during his Speech from the Throne on Tuesday.

Little attention was given to the Caribbean parts of the Kingdom in the annual Throne Speech on Budget Day. One short paragraph was dedicated to the islands, out of the 25 sometimes very long ones.

“Talks are held with the Caribbean parts of the Kingdom about what support can be given under what conditions. The objective is to support the people now and to contribute to the future economic resilience and social stability. Humanitarian aid continues to be available.”

This year, due to the coronavirus crisis, the Speech from the Throne took place in Grote Kerk, The Hague’s largest and oldest church. Traditionally, the event at the start of the parliamentary year takes place at Knight’s Hall (“Ridderzaal”) on the Binnenhof. Due to the limited space, there were fewer invited guests.

One group that could not attend as a result were the seven state secretaries. Only the ministers were in attendance, and so were Ministers Plenipotentiary Guillfred Besaril of Aruba, Anthony Begina of Curaçao and Rene Violenus of St. Maarten.

On Tuesday, the Dutch government presented the 2021 budget, which will be handled in the Second Chamber of the Dutch Parliament in the coming months, and subsequently in the First Chamber.

For strengthening the state of law in the Dutch Caribbean, 13.9 million has been allocated, of which 12 million euros is for the Kingdom Detective Cooperation Team RST. “Now that the approach to combat subversive crime has proven effective, the project-based approach will be changed into a structural strengthening of the RST, the Prosecutor’s Office and the Joint Court of Justice. The change from project-based input to structural strengthening will lead to sustainable combating of subversive crime through a broad and integral approach,” it was stated in the Kingdom Relations budget.

For promoting the social-economic structure on the islands, 16.9 million is earmarked in the Kingdom Relations budget for next year. A total of 28.5 million has been allocated for ongoing subscriptions to loans to which the Netherlands commits as part of the debt reorganisation.

For the year 2021, no budget has been allocated for the St. Maarten reconstruction. The part of the budget that does not get used in 2020 will become available in 2021. Depending on the developments this year, funds will be transferred from the Finance Ministry to the Kingdom Relations budget for the Trust Fund.

The Ministry of Home Affairs and Kingdom Relations BZK has been financing a part of the St. Maarten recovery operation after the 2017 hurricanes. Financial means are available until 2021 to replenish the Trust Fund which is managed by the World Bank. The intention is to make the last tranche of allocated means for the Trust Fund available in 2021.

The reconstruction focuses on repairing homes, shelters and schools, and tackling the waste management problem. Projects to reconstruct the airport terminal and to build a new hospital will continue. The Trust Fund will remain operational until the end of 2025. In total, the Dutch government allocated half a billion euros for St. Maarten’s recovery after Hurricane Irma devastated the island.

The Dutch contribution is attached to the political conditions to which St. Maarten agreed in 2018, including the establishing of the Integrity Chamber and increased border supervision. The Netherlands will see to it that the conditions are complied with during the reconstruction. The Netherlands will contribute to the Integrity Chamber for the last time next year, after which St. Maarten will have to bear the cost.

Aside from the Trust Fund, the Dutch government provides direct support to St. Maarten’s reconstruction; for example, with the expenditures in the area of law enforcement or technical assistance to improve St. Maarten’s financial management.

The impact of COVID-19 on the Dutch Caribbean is immense, also because the islands for the most part depend on tourism which has come to a grinding halt. “The problems that were already present in the Caribbean part of our Kingdom – financial deficits, high unemployment, high crime and poverty – have increased due to the COVID-19 crisis and as such have become visible to everyone,” it was stated in the Kingdom Relations budget.

“It has become clear that the countries Aruba, Curaçao and St. Maarten cannot survive on their own. It has become apparent that assistance from the Netherlands is necessary, not only in the financial-economic area, but also where it comes to food supply, health care capacity and logistical service.”

Medical assistance and food aid are already being provided unconditionally and that will continue. So far, the Dutch Caribbean countries have not agreed to the conditions for the third tranche and future tranches of liquidity support.