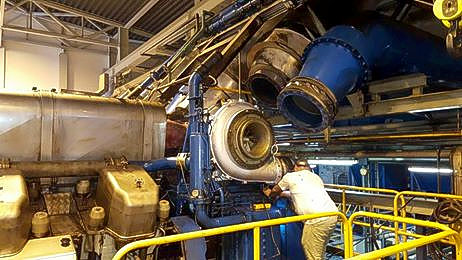 PHILIPSBURG–The correct part for the damaged part of utilities company GEBE’s “Engine 19” arrived in the country on Wednesday as scheduled and has been installed.

A GEBE representative said during a brief update on Wednesday that the part was being installed and the company was targeting discontinuing load-shedding around 7:00pm.

It could not be ascertained whether other issues were encountered at the company, as electricity in many districts was still out around 7:00pm and some were without power for several hours at a time late last night, much to many residents’ chagrin and growing frustration.

GEBE officials had told reporters on Tuesday that load-shedding would be discontinued Wednesday once the part had been installed. GEBE Chief Executive Officer (CEO) Kenrick Chittick had told reporters that the large engine #19, which supplies 11 megawatts of electricity, had gone down on Sunday and the supplier had been asked to send a specific part. However, the wrong part was sent, so the engine could not be repaired earlier as anticipated. The correct part arrived on Wednesday.

Chittick said load-shedding had become necessary when Engine #19 went down while the medium-size Engine #16, which supplies eight megawatts of electricity, already had been out of commission for several weeks for a major overhaul. This resulted in the company being unable to meet the current demand for electricity, resulting in load-shedding.

Chittick had said at the time that while the company had attempted to keep the load-shedding at two hours per outage, some areas had been out for longer periods. “Unfortunately, outages happen. It can happen that something goes wrong. I am not saying that we are not doing something to avoid it,” he said.

Chittick noted that the new engine’s coming online in December did not mean there would not be any power interruptions, as things could go wrong with engines that could result in interruptions.