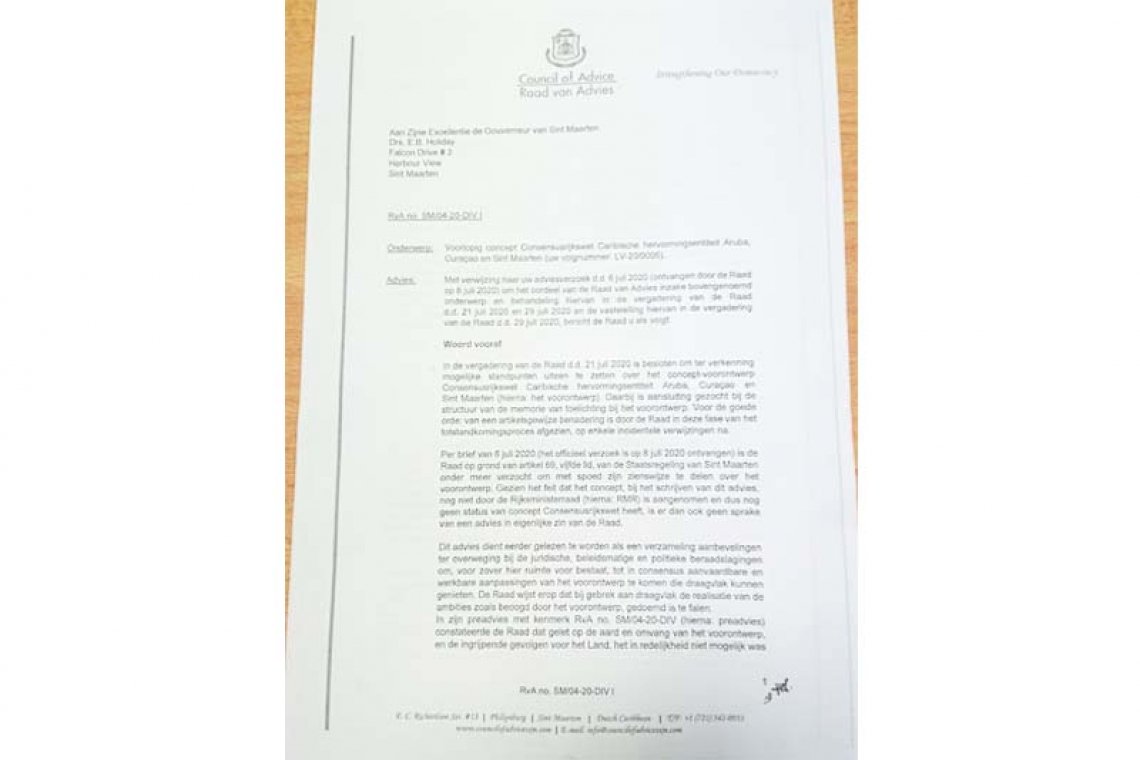 PHILIPSBURG–The St. Maarten Council of Advice late July 2020 urgently advised country St. Maarten and the Kingdom to engage in constructive consultations, keeping in mind the people’s well-being and the exceptionally precarious situation that the population is faced with.

The Advisory Council on July 28 submitted its advice, which is actually a series of recommendations, with regard to the preliminary draft Kingdom Consensus Law on the Caribbean Reform Entity for Aruba, Curaçao and St. Maarten to Governor Eugene Holiday. The 14-page document has not been made public, but The Daily Herald has obtained a copy of it.

The Council pointed out that consultations between St. Maarten and the Netherlands are indispensable if the countries are to reach a consensus on the proposal Caribbean Reform Entity (CRE) and the measures that The Hague wants to see implemented in order for St. Maarten to receive liquidity support to help overcome the dramatic effects of the coronavirus COVID-19 pandemic.

The preliminary law proposal for the CRE, which is part of the conditions tied to the third tranche of liquidity support, does not have the political support of St. Maarten. In St. Maarten, the law proposal and conditions are politically perceived as an attempt to illegally violate the country’s autonomy.Strictly legally speaking, the Council remarked that the term “violation” was incorrect, and that not every restriction of autonomy resulted in a violation. However, a restriction of autonomy always constitutes an “infringement” on that autonomy.

According to the Council, the consideration behind the preliminary law proposal on its own does not violate the country’s autonomy in an unacceptable manner, firstly, because the autonomy as stated in the Kingdom Charter is not of a higher order than, for example, securing fundamental human rights and freedoms, legal security and good governance, which are also defined in the Charter.“Without sufficient funding, these important elements of good governance will quickly get into hot water. At the same time, the importance of autonomy must be weighed. This does not mean that the preliminary law proposal can be accepted as is,” it was stated.Consultation and mutual agreement are imperative and should be leading, in fact.

Sufficient room should be created for St. Maarten’s government and Parliament to have a say. Because sticking to a construction that will further increase the democratic and administrative deficit in the Kingdom will create a situation where the next step is “doomed to fail” due to the uneven relations within the Kingdom and lack of public support.A lack of agreement about the projects that are executed as part of the country package and the associated measures, can lead to the conclusion that the implementation of the Kingdom Law and the included sanctions conflict with the autonomy defined in the Charter.

The Council recommended clarifying role definition in the final law proposal between the CRE, the St. Maarten government and Parliament and bringing this more in line with the assurance of Dutch State Secretary of Home Affairs and Kingdom Relations Raymond Knops that it is not the intention to take away the countries’ autonomy.The Council did have a thing or two to say about the proposed legal embedding and construction of the CRE. Reforms are highly necessary, something that has been pointed out by the Council before, because it will accomplish a stronger St. Maarten in the broadest sense. However, the Council does have some doubts about the proposed route.

The CRE will operate as an independent administrative entity under Dutch law, which means that it will not be accountable to the Dutch Caribbean Parliaments. This, while an unconditional political commitment is asked of the countries, although the commitment of the Netherlands/the Kingdom as to the financial content is relatively informal and dependent on the tides of the political landscape in the Netherlands, the Council noted.According to the Council, the mandate given to the Dutch Minister of Home Affairs and Kingdom Relations is too broad without there being adequate approval possibilities or accountability mechanisms for the Caribbean countries. Therefore, the Council recommended to design the authorities of the CRE on a mutual basis, possibly similar to the Committee for Financial Supervision CFT.

In the preliminary law proposal, the countries Aruba, Curaçao and St. Maarten are expected to give their complete cooperation to the projects that will resort under the CRE. If the countries’ governments have had no say in the procedure of these projects and the CRE is only accountable to the Minister of Home Affairs and Kingdom Relations without it having to take the democratic and legal accountability systems of the countries into consideration, it means de facto that the CRE is co-governing the countries.

The Council recommended to explicitly secure and explain in the draft law how the St. Maarten Parliament during the regime of the CRE will remain involved in the decision-making process. “This is especially important because the projects will be part of the country’s budget, and otherwise the budget right of the Parliament will be jeopardised.” Furthermore, it was recommended to have St. Maarten’s representation secured in the CRE in the same manner as this has been arranged in the CFT.  The Council further noted that considering the “hybrid role” of the CRE, attention needs to be given to the “inherent conflict” between the supervisory role and the supportive role in developing and executing projects. In essence, it means that the CRE will supervise its own execution activities. This will put unacceptable pressure on the objectiveness of supervision and will need to be revised in the final law proposal.

The initiating, promoting and executing of projects of the CRE in principle will not infringe on the autonomous position of the countries’ governments, since the legislation of the countries will determine the execution of the parts of the country packages. However, continuous consultation, mutual understanding and cooperation will be basic elements in order to achieve the desired results.St. Maarten can have influence, to a certain extent, in the execution of the country package if it accomplishes the necessary reforms on its own. This does require a continuous negotiation about the content of the country package and a strong persuasiveness that these reforms will actually be carried out.As for the direct influence of the CRE in government-owned companies, as is proposed in the draft law submitted by the Dutch government, the Council advised to reconsider this and to clearly define the limitations. According to the Council, it was not entirely clear why this measure was needed next to the subsidy regime.

Also not clear to the Council was why the possibility was envisaged for the CRE to initiate increased financial supervision when there is already the CFT and the related Kingdom Law on Financial Supervision. The country’s budget is already under supervision of the CFT and increased supervision is already possible under the financial supervision law.The Council advised to clearly mark the borders between the supervision to be carried out by the CRE and by the CFT, and to avoid duplication or conflicts between the authorities of the two.The Council acknowledged that the many government switches in St. Maarten since October 10, 2010, have damaged the country’s reputation as a trustworthy partner in the Kingdom. The changing mutual relations require a sustainable solution, and the Kingdom has now made an attempt to forge better relations with the proposed law.In the final law proposal, there should be attention for the sustainability of the reforms, in the opinion of the Council. This, to ensure that after the CRE ceases to exist, after seven years or more, the reforms endure. There should be attention for the building of a sustainable execution capacity of country St. Maarten.

Also not lost from sight should be the public support for the reform measures. Public support is necessary to achieve the goal, taking into account the experiences with the deployment of outside entities in the recent past, such as the World Bank. “It seems that this has not been sufficiently considered in the preliminary proposal.” The Council recommended that if there is no room for negotiating, or when the negotiations will not result in consensus, St. Maarten will need to have an alternative strategy in place. “This strategy should be aimed at permanently securing fundamental human rights and freedoms, legal security and good governance without Dutch liquidity support.”